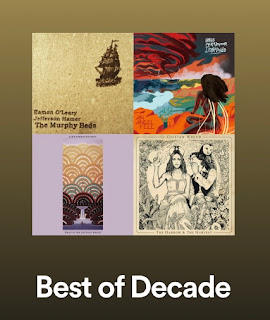 This is not an attempt to name the biggest or most important albums of the last decade. I'm too old to care about that. These are just the ten albums that I rank the highest from the years 2010 to 2019.

Listening methods and habits changed pretty significantly during this decade. Spotify became the new norm - an endless supply of albums, artists and tracks to check out. At some point I learned how to let my ear take the lead.

Here are those ten favorites in chronological order.

Tommy Guerrero - Lifeboats and Follies (2011)
Highly influential DIY instrumental grooves from a guy originally know more for his skateboarding than his music. Not overly complex, but extremely enjoyable. (This style of music was a big part of my listening the last decade. Khruangbin's The Universe Smiles Upon You could also have represented).

Atlantis Jazz Ensemble - Oceanic Suite (2016)
Spiritual, modal, North American jazz with an ear toward Europe and Africa. Meditative and introspective music meant to elevate the soul. Yes there is a love supreme.

Jake Xerxes Fussell - What in the Natural World (2017)
There's beauty, strangeness and savagery in these songs, telling of devils, dangers, ghosts and mythical monsters. Fussell chooses to interpret his "old-timey" repertoire on electric guitar instead of acoustic, and it works.

Idris Ackamoor and the Pyramids - An Angel Fell (2018)
This is my jam. The rhythms and melodies traversed over the course of this album's hour are patient, cosmic and spread far out. A further highlight are the tones band member Sandra Poindexter is able to summon from her violin.

Two guitar legends, the sixtysomething Bill Frisell and the thirtysomething Mary Halvorson meet (for the first time on record) on the high, common ground that is Johnny Smith. What could have easily turned into a competitive battle of notes is actually the exact opposite. The two guitars blend in a delightfully cooperative way that is way more calming and far less noisey or flashy than one might have expected. The more closely you listen the more you are rewarded.

William Tyler - Goes West (2019)
If there's no tension, can there be release? William Tyler's beguiling instrumental melodies bask in the now while also peering ahead at something just out of reach, just off the screen, marching, but sometimes jigging, on the edge of Americana.

Email ThisBlogThis!Share to TwitterShare to FacebookShare to Pinterest
Be a Fan
Posted by Tanner Llewellyn at 11:37 AM