A Week In Asheville - bars, restaurants, hiking and more

Several times back in the early 2000's I would make the six-hour drive from Richmond, VA to Asheville, NC to see bands like Yonder Mountain String Band or Sound Tribe Sector Nine at the then newly opened Orange Peel in this progressive, hippie-friendly city in the Blue Ridge Mountains.  We would always stay at the now closed Days Inn on Patton Ave. (must have been cheap), and besides seeing those shows the extent of my exploration in Asheville mostly consisted of drinking at the Jack of the Wood pub across the street.  The last time I was there was in 2009 for Phish so having now returned for a week as a tourist in Fall 2018 I found a bustling city more cosmopolitan than the dreadlocks and patchwork oriented town I remembered, with a food scene, bar scene, and hiking opportunities that more than matched my current interests.

Restaurants
We tried out several restaurants in Asheville including some of the more buzzworthy or well regarded places, but the two restaurants I'd like to give a shout out to are Calypso and Rosetta's Kitchen.

Calypso is a Caribbean restaurant and rum bar offering St. Lucian style dishes and island cocktails.  They might not be as popular as some of the nearby restaurants like Salsa's or Nine Mile, but for me Calypso had the best food of any place we ate at in Asheville.  And they make great rum drinks like painkillers and mai tais. 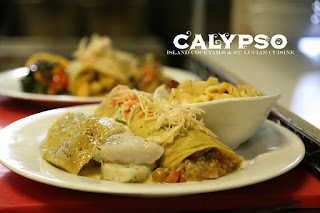 Rosetta's Kitchen was my other favorite restaurant in Asheville.  Plant may get more recognition as the go-to vegan/vegetarian restaurant in Asheville, but for my taste you can't beat the laid back feel of Rosetta's Buchi Bar, where they serve flights of Buchi Kombucha and even make kombucha cocktails.  Rosetta's signature dish is called Family Favorite - peanut butter baked organic tofu, sauteed kale, and smashed potatoes with gravy.  Better than any words can convey.  Yep, vegan comfort food is a real thing.

Cocktails
I guess I like fancy cocktails, at least while on vacation.  Topping my list of cocktail bars is the tenebrous Crow and Quill, a gothically decored speakeasy found behind an unmarked door on Lexington Avenue where the lighting is dim, the conversation is low, and the drinks are strong.  Inside you can try one of their 700+ liquors - top shelf - or one of their finely crafted mixed drinks.  Crow and Quill is a place to sip and look calm, cool and collected on the outside, pretending to read a book while getting drunk and weird on the inside.

My other favorite cocktail bar, or just "bar", was Little Jumbo which is located a few blocks north of downtown proper in an area at the edge of either North Asheville or Montford.  Anyway, Little Jumbo had more of an upscale neighborhood bar feel - less touristy than places in downtown.  Definitely worth the walk or Uber to get there.  This would probably be my local favorite if I lived nearby.  We went to Little Jumbo on two separate occasions.  Most fun for me was when each night's bartender, Kaitlyn or Lindsay, ventured off the menu to concoct special drinks worth trying.

I'll also add The Social Lounge to this list.  We happened to notice this downtown staple on our last night in Asheville and the two drinks I got there (called Thalia and Wondermint) were tasty and refreshing.

Actually, my cocktails rundown wouldn't be complete without recognizing my two favorite restaurants from above - Calypso and Rosetta's Kitchen - which each served up awesome and unique mixed drinks to go along with the delicious food.

Beer
I'm not as much into beer as I used to be, but craft beer is still trending hard in Asheville.  Without too much arm-twisting, I delved into some brewery sampling that included highlights at the Funkatorium (an unparalleled selection of sours), Dirty Jack's (home of Asheville's legendary Green Man Brewing), One World (cool downtown basement location with live music), and Burial (rocking the South Slope with its Tom Selleck meets the Grim Reaper ethos). 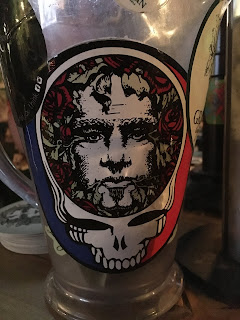 Hiking
Evenings might be devoted to food and drink, but during the daytime in the Asheville area your hiking options are seemingly endless.  We were rained out a couple days, but still got some good walks in during our week there.  My favorite place was the North Carolina Arboretum at milepost 393 on the Blue Ridge Parkway.  Through an improvised route utilizing the Arboretum's Carolina Mountain Trail, Bent Creek Trail, Azalea Collection Trail and Wesley Branch Trail, among others, we were able to put together a fantastic two-hour hike that was adjacent to a flowing creek (Bent Creek) for much of the way.

When a cloudy day became a sunny one we took the opportunity to do the short but scenic Craggy Gardens hike to its 5,892 foot summit at Craggy Pinnacle, where the trailhead is located at an overlook just north of the Craggy Gardens visitor center on the Blue Ridge Parkway.  Closer to Asheville there are many opportunities do hikes along the Mountains to Sea Trail.  A couple starting points include the trailheads at the Blue Ridge Parkway Visitor Center (MP 384) or the Folk Art Center (MP 382). 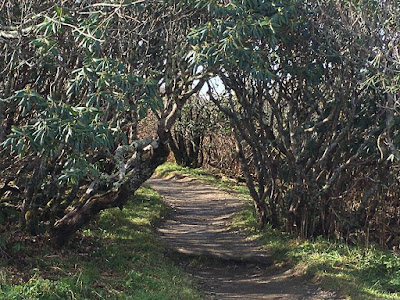 Within the city itself there's a paved footpath/bike path/moms-with-strollers path called the French Broad River Greenway, which parallels the mighty French Broad River.  It was unclear to me how far this greenway stretches, as we only walked on it for about an hour one casual day starting near the dog park.  That said, I think it runs for several miles all the way from New Belgium Brewing to Hominy Creek.  This is a pleasant, low-key option for folks looking to stretch their legs but not have to venture too far.
Music
Asheville is a live music destination.  Like I said at the top of this post, I used to not think twice about driving six hours to see a band play there.  This time around I managed to encounter some good music without even seeking it out.  For example, who should be playing at Jack of the Wood as part of their weekly bluegrass "jam"?...a pick-up band consisting of guitarist Jon Stickley (of the Jon Stickley Trio), his fiddle playing cohort Lyndsay Pruett, and up and coming mandolinist Thomas Cassell.  They were doing a set of mostly David Grisman or Dawg-like tunes. 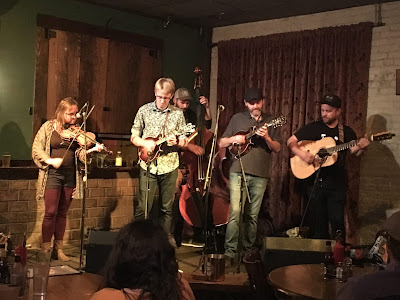 Although I failed to make it to Salvage Station for what would have surely been good times, we did pop into One World Brewing on the night of their Soul Jazz Jam and I was impressed by the musicianship of the musicians taking part in an open jam.  Another musical highlight was a jazz trio at Little Jumbo (they have live jazz there every Monday).

Bookstores
One of my favorite things to do on vacation is to check out book stores.  Downtown Asheville has an outstanding indie bookstore called Malaprop's.  I enjoyed sampling their staff selections area where I picked up a short story collection called North American Lake Monsters by a local author named Nathan Ballingrud.  So far the stories in it are sort of like Raymond Carver meets Stephen King. 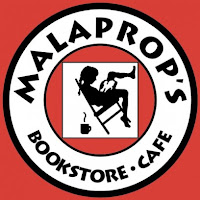 For used books, I liked Downtown Books and News.  There I randomly found a book I had not been expecting to find and got a kick out of just poking around its selection of second-hand books.

When venturing into West Asheville, a somewhat disheveled yet left-leaning locals-only neighborhood across the French Broad River, a must stop is Firestorm Books and Coffee, where one could easily spend some time perusing the shelves.

Email ThisBlogThis!Share to TwitterShare to FacebookShare to Pinterest
Be a Fan
Posted by Tanner Llewellyn at 3:04 PM