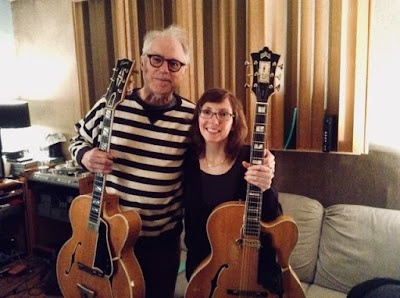 Somewhere around mid-to-late August I learned that two of my favorite musicians, guitarists Mary Halvorson and Bill Frisell, had released a duo record called The Maid with the Flaxen Hair.  That's past tense.  Made.  Released.  As in available as of July 2018 and therefore already out now at this very moment.  Why was I just then finding this out?  Weeks earlier I could have been listening to it, if only I had known.  Maybe you are finding out right now, as you read this.  I instantly went in search of this music.

It wasn't easy to instantly find.  Spotify didn't have it.  (The album is on the Tzadik label, whose stuff isn't usually on Spotify.)  It also wasn't on Bandcamp.  Fine, I'll order it on vinyl, I thought.  Nope it's not available on vinyl.  That sucks.  It is on CD, but who buys CDs any more?  Still I wanted to hear it ASAP so I was willing to purchase the CD and then convert it to digital upon delivery (the only CD player I still have is on an old laptop).  But then, luckily, after first searching and not finding it, I found it on Amazon ready to be downloaded.  Finally, instant gratification.

And it's as awesome and refreshing as I had hoped it would be!

Instead of each contributing original material, Frisell and Halvorson meet on middle ground by covering music associated with the sophisticated and dare I say easy listening 1950's era guitarist Johnny Smith, whom they both admire.  I'm not that familiar at all with Johnny Smith, nor am I that well versed in the jazz canon, so most of these melodies outside of Shenandoah were new to my ears.  Not complaining, but how many times does Bill Frisell need to record Shenandoah?!

I like the idea of interpreting songs from the golden era in a project like this because these standard(?) tunes bring with them very strong melodies.  Having that classic structure in place can give two adventurous musicians plenty of material to work with and build up from.

Now to the listening part.  Would it be cliche to say that Mary and Bill contribute exactly equally?  By that I mean neither guitarist outshines the other.  If anything they attempt to out humble each other.  This is not the multi-generational competitive battle of virtuosity or egos that it could have devolved into.  No, the two guitars blend in a delightfully cooperative way that is way more meditative, and far less noisey, flashy or "out" than one might expect.


It's not always easy to tell who is playing what, but if I had to guess I would say it sounds like Bill is playing more lead stuff and Mary is doing more accompaniment, but I'm not sure if those traditional roles even apply here.  And who knows, I could have it backwards.

I definitely know it's Mary when I hear her signature pitch-shifting.  She has yet to ever stray too far from that, no matter what the setting is.  In Bill's case he seems to play things fairly cleanly, but there is the presence of the delay/looper effects he is known for.  Hearing these innovative guitarists' immediately recognizable and iconic individual characteristics being played in tandem, as on Black is the Color of My True Love's Hair, is quite satisfying.

Frankly, I'm not really listening to hear who is doing what...instead I'm just bathing in the calming sound this beautiful work induces.  I'm so happy this music now exists and it came out better and more tasteful than I could have ever imagined.


Email ThisBlogThis!Share to TwitterShare to FacebookShare to Pinterest
Be a Fan
Posted by Tanner Llewellyn at 9:46 PM