I've been playing tenor banjo for over ten years now.  Tenor banjo is tuned in fifths, either CGDA or GDAE.  This tuning is very symmetrical, but the fifth interval between the strings means that notes in closed positions don't really fit under the fingers.  To remedy this and yet retain a similar symmetry, I've been thinking that an all fourths tuning would be fun to try.

The day before yesterday I received a left-handed Vagabond guitar made by Kevin Smith of StringSmith.com and tuned it EADGCF.  Note how the two highest strings are tuned up a semitone (from B to C and from E to F, respectively).  One of the first things I did was try and play the major scale across all six strings and as expected it fits very well under the fingers all up and down the neck.

After quickly familiarizing myself with where notes one through seven of the major scale are located, I then analyzed one of my tunes called Frosted Cherry and wrote out the melody in terms of where the notes fall on the major scale.  This is something I learned from David Reed's book Improvise for Real.  See image below, where the numbers begin 3 6 1 3 2 2 2.  In the Cmajor scale this would equate to the notes E A C E D D D.  In the Amajor scale these notes would be C# F# A C# B B B.  And so on. 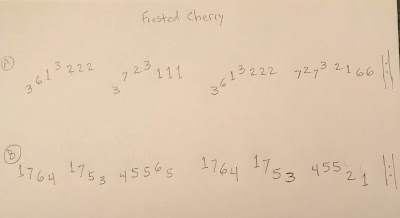 With the Perfect Fourths (P4) tuning on guitar, you can play all of the notes of the major scale anywhere on the neck.  This also means that in this tuning the above melody to Frosted Cherry can be played in any key, in any position on the neck without ever having to use open strings.  This type of lead sheet replaces both guitar tab and sheet music and transcends key.

To make the recording below I found a random place on the neck to play the major scale.  I then figured out where the notes to Frosted Cherry would fall within that scale and played the tune.  As mentioned above this tune starts on note 3 of the major scale.  I don't even know what key I was in while playing it.  It was about playing out of a position, not a key.


That's all I have to say about this right now, but the possibilities seem endless.
Email ThisBlogThis!Share to TwitterShare to FacebookShare to Pinterest
Be a Fan
Posted by Tanner Llewellyn at 9:54 PM