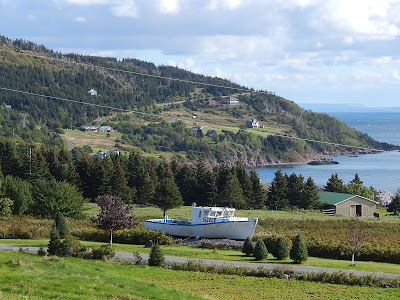 I've been wanting to visit Nova Scotia for some time now.  In 2018 I hope to make this happen.  The coastal drive I did in fall 2016 from Portland, OR to Los Angeles, CA was one of my favorite vacations of all time.  From the looks of it, Nova Scotia has enough coastal roads to be a North Atlantic Maritime equivalent to the Pacific Coast Highway.

Since this will be my first time in Nova Scotia I feel like I need to see as much of it as possible in the course of the 9 nights I have to spend there.  Much of the tourist information focuses on the Cabot Trail in Cape Breton and from what I gather this loop lives up to the hype.  So despite some inclinations toward just spending a leisurely vacation in and around Lunenburg and Wolfville, I am driven to add the 700+ miles it would take to see Cape Breton.

After much rumination, here is the plan I've come up with.

Fly into Halifax. (If I lived closer to Portland, ME I'd consider taking the ferry to Yarmouth).  First two nights in Lunenburg, which is about 70 miles from the airport.  Most flights, after one or two stopovers, arrive to Halifax relatively late in the day/evening and by the time you rent a car and make the drive to Halifax the day is pretty much done.

For the first and only actual full day in Lunenburg my plan is to drive west along the South shore, visiting Hirtle's Beach/Gaff Point and then taking the ferry across the LaHave River, then continuing along 331 toward Broad Cove and Cherry Hill, passing Crescent Beach, Rissers Beach and Green Bay Road along the way.  Then backtracking along 331 with a possible side trip to Petite Reviere Vineyards.  Instead of taking the ferry back across, a fun drive might be continuing along and around the LaHave River, maybe stopping for a walk at Miller Point Peace Park.  I'd want to be back in Lunenburg by mid-afternoon to check out Ironworks Distillery. 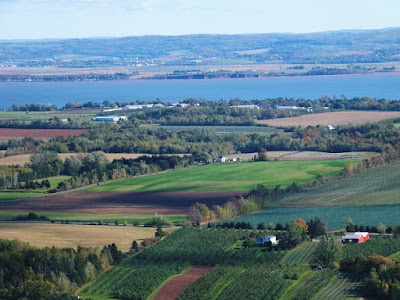 The next morning could start with a mission to Blue Rocks just outside Lunenburg before making the 90 minute drive from there to Wolfville.  I need to figure out a couple wineries to check out among the many to choose from in the Wolfville area.  If there's time, an afternoon hike in Blomidon Provincial Park might be possible before checking in to a waterview hotel.  The next day a block of time will need to be set aside to do the Cape Split hike.  I think it's about 5 miles each way on a trail that leads to a rewarding view.  There will need to be time for a post-hike drive to the coastal town of Hall's Harbour, returning along scenic roads back to Wolfville.

The next day could require a lengthy, time consuming drive from Wolfville to Antigonish, especially if I take 215 which passes by the Walton Lighthouse and Burntcoat Head, and continue on to 245 and 337 to the destination of Cape George Lighthouse.  The scenery around Cape George on 337 is supposed to be among the best in all of Nova Scotia.  The town of Antigonish to the south of there should be a decent stopover for the night.

The next day's drive from Antigonish to Baddeck will be a little less demanding, so there should be time to see beaches near Mabou and do a hike in the Mabou Highlands, while also stopping off at the Glenora Distillery for a tasting. 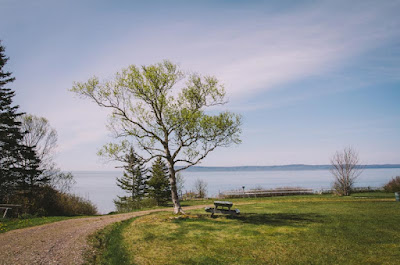 Due to its location along the famed Cabot Trail, Baddeck is a likely choice for an overnight or two.  Driving the Cabot Trail as a loop from Baddeck to Baddeck is about 185 miles, so it's doable in one long day.  I plan on doing it counter clockwise.

After two nights in Baddeck and having checked the Cabot Trail off the list, things may start to get a little more uncommon as the road takes me to Nova Scotia's less traveled Eastern Shore.  Liscomb is about a day's coastal drive from Baddeck. There is supposed to be good hiking there too.

Lunenburg is such an appealing town that it makes sense to spend the first two nights there.  The village of Mahone Bay looks almost equally as enticing, yet it is only seven miles from Lunenburg.  In thinking about the logistics of this trip, I don't mind the idea of spending the last night in Mahone Bay.  It's a very plausible driving distance from Liscomb the night before and only about an hour to the Halifax airport.  If a later flight out can be arranged, then after the night in Mahone Bay there may even be time to see the tourist mecca of Peggy's Cove.  Saving this popular lighthouse for the very end might be a good way to judge its awesomeness.

That's it.  Since I'm only planning for nine nights, I'll have to cut some things out - most noticeably any time in the city of Halifax.  But the point of this vacation is to do scenic coastal drives between rural areas, do some hiking, visit a winery or two, and stay in small waterside villages.  I'm also cutting out the whole western edge from Liverpool to Yarmouth around to Digby and Annapolis Royal, as well as the northern Parrsboro/Advocate Harbour side of the Minas Basin.  Sydney, Tatamagouche, Bras d'Or Lake, Kejimkujik National Park...lots of places.

I have a feeling that I'm going to like Nova Scotia, so after this fact finding high-mileage road trip I'll be better equipped to hone in on a smaller area the next time after this one.


Email ThisBlogThis!Share to TwitterShare to FacebookShare to Pinterest
Be a Fan
Posted by Tanner Llewellyn at 10:14 PM