Here are my favorite albums of 2015.  This was the year of the woman, with more than half of my selections featuring women as solo performers or band leaders. 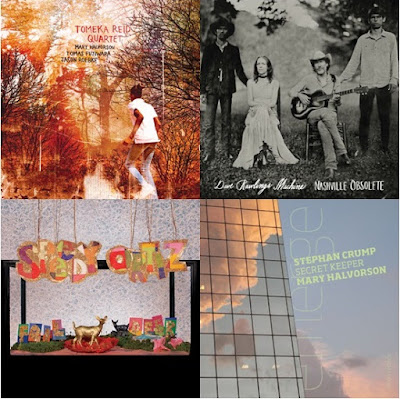 Tomeka Reid Quartet - Tomeka Reid Quartet
Seeing this quartet perform live in Baltimore this summer is a big reason for their inclusion at the top of the list.  The album is like a slightly more condensed version of that live set; it's "out" in the way that some of the more avant-garde music I've been listening to is, but is also easily identifiable as jazz.  These are still tunes with a form, played freely in a way that still has groove or swing.

Dave Rawlings Machine - Nashville Obsolete
I loved this album from the moment I first heard it.  David Rawlings has taken his time warming to the idea of being a front man but now he's fully developed that attitude.  When the wave of newness crashes, I think we'll be left with a unique album that is a perfect complement to his usual work with Gillian, where the roles are reversed.

Speedy Ortiz - Foil Deer
A group of twentysomethings playing what could be described as retro sounding 90's rock is probably not the kind of thing you expect to find on a 40-year-old dude's best of the year list, or is it?  Speedy Ortiz does this well.  There's always a lot going on musically in each of these songs and Sadie Dupuis' lyrics have a way of wrapping around your brain the way bacon wraps a scallop.  How's that for 3rd place?

Secret Keeper - Emerge
Secret Keeper is a perfect example of where my tastes have been heading the last couple years.  Yes at their essence these are compositions, but that only accounts for about twenty percent of what's going on.  The rest is an in-the-moment bass and guitar conversation between Stephan Crump and Mary Halvorson that could probably never come out the same way twice,  Think of it like this:  the way that you are able to fluidly chat with a really good friend...that's the music that Secret Keeper makes.

Holly Bowling - Distillation of a Dream: The Music of Phish Reimagined for Solo Piano
Holly Bowling became an overnight internet sensation (among Phish fans) due to her spot-on transcription and arrangement of a particularly inspired 37-minute instant-classic improv Phish did in 2013 now called the Tahoe Tweezer. That piece is included on this album, but surprisingly my favorite tracks are the ones on "disc one", which are very devout instrumental readings of about a dozen different songs, including Harry Hood, The Squirming Coil, Wingsuit and A Song I Heard the Ocean Sing.  If this wasn't such solidly written music in the first place it wouldn't work in this solo piano format, and if Holly weren't the player she is she wouldn't be able to bring out the fullness of that beauty.  It works on each of those levels.

Courtney Barnett - Sometimes I Sit and Think, and Sometimes I Just Sit
Indie tastemakers, and maybe even some mainstream outlets, have already been heavily touting the talents of Courtney Barnett.  I suspect that this album will show up on a lot of best-of lists this year, as it should.  Courtney Barnett has a way of looking at the world that is inclusive.  She can turn a personal experience into something that transcends generations and cultures and speaks toward a universal view of the moment.  I think that's why people are digging her so much.  That's why I am.

Susan Alcorn - Soledad
Susan Alcorn plays pedal steel guitar.  Not in a country and western style but in a singular way as an outlet for channeling her inner improvisations.  On Soledad Alcorn patiently re-interprets the work of Argentinian composer and accordionist Astor Piazzolla.  The result is something out of this world yet very down home.

Circle Around the Sun: Interludes for the Dead (Fare Thee Well setbreak music)
When I watched the Santa Clara webcast of first of the five GD50 shows this summer, one thing that caught my ear was the mesmerizing music being played during the setbreak. It wasn't just filler. It turns out that musician Neal Casal was commissioned to create about 5 hours of music to be played during intermission at the Grateful Dead's Fare The Well Shows in Santa Clara and Chicago. Ever since I figured out what it was, who was doing it, and why, I knew it would be on my list of the year's best regardless of whether it was being officially released or not.  Fortunately it was released - in a slightly edited form - as Circles Around the Sun on 11/27/15.

Mary Halvorson - Meltframe
Meltframe is Mary Halvorson's long awaited debut solo guitar album and it doesn't quite sound like anything she's ever done.  For one thing it's an album of covers.  Most of her recordings thus far have been original compositions or pieces by her various band members. I hesitated to include Mary three times on the top ten list (Tomeka Reid Quartet, Secret Keeper and Meltframe) but the impact of this album is too sustaining for it to be omitted.  My level of appreciation for Meltframe is only going to grow over time.

Erik Friedlander - Illuminations
2015 is the year that I started listening to the Bach Cello Suites as played by Pablo Casals (as well as the classical Haitian guitar of Frantz Casseus).  That is some of the most beautiful music I've ever heard, so I went looking for something more recently made in the same vein, which is how I found this new album by Erik Friedlander.  Illuminations is a suite for solo cello that uses the Bach suites as inspiration.  Instead of being based on French dances, Friedlander's pieces sometimes have a hypnotic, Eastern touch.

Honorable Mention (the next 10):
Gilles Peterson Presents Sun Ra and His Arkestra - To Those of Earth... And Other Worlds
Mandolin Orange - Such Jubilee
Joan Shelley - Over and Even
My Morning Jacket - The Waterfall
Dawes - All Your Favorite Bands
Alex Bleeker and The Freaks - Country Agenda
Pharis and Jason Romero - A Wanderer I'll Stay
Trey Anastasio - Paper Wheels
Michael Gibbs and the NDR Big Band - Play a Bill Frisell Set List
Built to Spill - Untethered Moon

That's what I was listening to this year.


Email ThisBlogThis!Share to TwitterShare to FacebookShare to Pinterest
Be a Fan
Posted by Tanner Llewellyn at 9:06 PM