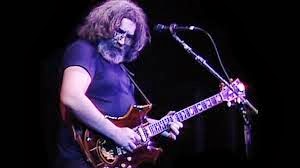 1982, '83 and '84 are sometimes considered Grateful Dead throwaway years, but they are worth exploring.  There's a grungy, dirty vibe going on and while not exactly tight, the band is certainly not afraid of taking chances during this period, just maybe not the chances fans were expecting them to take.

They've never officially released a DVD from these years - it could be out of a concern for Garcia's countenance being not fit for general public consumption.  But apparently, there are good quality early 80's videos in circulation, such as the seemingly pro shot video from 12/28/83.

Perhaps because it was a hometown San Francisco show, on a low pressure night (New Year's Eve was still a few days off), with no performance scheduled for the next day 12/29, they were able to chill out and play a sleeper of a show.  Early on Bobby seems to challenge Jerry to step it up and vice versa, in that not so super-friendly rapport these two kind of always had.  The Freudian ebb and flow dichotomy of Grateful Dead sets soon takes over.  The Loser at 19 minutes in is sufficiently sick.

The video is below.  If you just want to listen to the audio, here's a link.


Email ThisBlogThis!Share to TwitterShare to FacebookShare to Pinterest
Be a Fan
Posted by Tanner Llewellyn at 11:43 PM