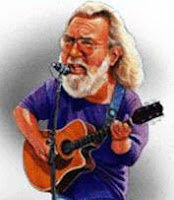 I had heard about about a BBC documentary on improvisation from the 1980's that featured an interview with Jerry Garcia.  It took a bit of searching to track the video down, so I am linking it to it here for future reference.

The documentary is called Derek Bailey: On the Edge and Garcia is featured in part 4 of 5.  I watched a little bit of some of the other segments and it looks like an interesting film as a whole.

The part with Garcia starts at about a minute and 45 seconds into the clip and runs for about 10 minutes.

Derek Bailey: On the Edge (Part 4) from Andy Wilson on Vimeo.

In related content, here's a link to a well researched New Yorker article by Nick Paumgarten on the recorded legacy of the Grateful Dead.  Breaking from the norm a bit on this Sunday morning.


Email ThisBlogThis!Share to TwitterShare to FacebookShare to Pinterest
Be a Fan
Posted by Tanner Llewellyn at 8:56 AM