What is a Barndance?

Beyond the jigs and reels, there are lots of other types of Irish traditional tunes worth discovering, including the hornpipe, slip jig, slide, polka, march, fling, mazurka and air.  One type of dotted rhythm that has been catching my ear is the barndance, but besides just knowing it when I hear it, I couldn't quite figure out what makes a barndance a barndance so I went looking for more information.  The details below come from the Irish Traditional Music Archive. 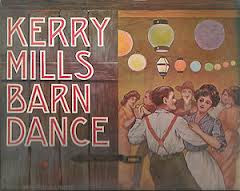 The barndance is in origin both a musical form and an accompanying social ballroom dance which became popular in England and north America in the late nineteenth century.  Early barndance music was composed by professionals or consisted of existing melodies adapted to suit the new fashion.  It's usually in 2/4 or 4/4 time and strongly marked in rhythm, with an emphatic ending to each section.  Barndances are likely to have come into Ireland through commercial sheet music and the activities of professional dance teachers.  In time they were danced and played traditionally, mixed in during a night’s dancing with older forms.
While barndance melodies begin to appear in collections of Irish traditional music in the late 1920s, they had earlier and more influentially begun to be issued from the early 1920's on 78rpm commercial discs recorded by Irish immigrant musicians in New York and other American centers of Irish settlement.  The recordings influenced local repertory in Ireland as they began to be heard widely there from the 1920's.
I'll also add that barn dances are almost always in major keys.  To really get a handle on the distinctive, turn of the century character of a barndance tune, you need to listen to some.  Thankfully, the Irish Traditional Music Archive has created a playlist of 18 sound recordings of barn dances, taken from 78's of the 1920's  to 1940's.  Turn it up!  Or take a look at this video of Gerdie Commane playing Kilnamona Barndance.

Email ThisBlogThis!Share to TwitterShare to FacebookShare to Pinterest
Be a Fan
Posted by Tanner Llewellyn at 9:57 PM