If I could only listen to one album of Irish traditional music and one album of Southern Appalachian oldtime music, to use as sources for learning to play in each style, the choices would have to be Angelina Carberry's An Traidisiun Beo and Alan Jabbour's and Ken Perlman's Southern Summits. 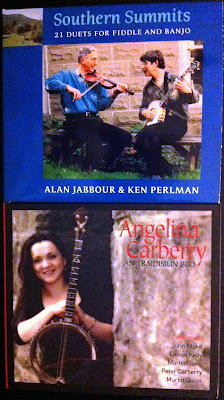 For me, nothing better defines trad music than the sweet sounds of An Traidisiun Beo, the 2005 album of Irish tenor banjo music by Angelina Carberry.  Not too technical, not too fast; just straightforward interpretations of jigs, reels and hornpipes.  On about half the tracks Angelina's banjo melodies are matched with accordion - either played by her husband Martin Quinn or her father Peter Carberry.  On the remaining tunes her lead playing is backed by the subtle guitar or piano of John Blake or the equally subtle bodhran playing of Martin Quinn.  It's on these arrangements - with her easy-going, bouncy plucking front and center - that Angelina really shines.  Many of the unwritten, informal rules of Irish tenor banjo are contained within this album's 27 tunes; a lifetime of learning within its 51 minute playing time.

Alternatively, for Southern Appalachian music the best thing I've heard so far is Southern Summits by fiddler Alan Jabbour and clawhammer banjoist Ken Perlman.  It too was recorded in 2005.  Instead of fiddle leading and banjo seconding, on this album the two instruments are working as equals - in sync and intertwined.  Perlman's melodic clawhammer style may be innovative, but when played alongside Jabbour's stately fiddling it sounds like it was that way all along.  As usual, Jabbour draws heavily on tunes learned from his mentor Henry Reed, but also brings in some from fiddlers Taylor Kimble, Edden Hammons, Vaughn Marley and more.  Since I don't play fiddle or clawhammer banjo, or tune my tenor banjo to anything other than GDAE, it's not as easy to directly hone in on the lead melody as it's played here, but because the two instruments fit so well together, an outline can begin to be drawn by listening to both.

I like how each of these recordings stay true to their respective genres without trying to modernize the music in any way.  In Angelina's case she's more concerned with well-paced, tasteful playing than an inundation of flashy notes.  For Jabbour and Perlman, they sound like a couple friends playing music in a parlor rather than the driving, string band music you hear reverberating around festival campgrounds.  There's something to be said for old school nuance and integrity.


Email ThisBlogThis!Share to TwitterShare to FacebookShare to Pinterest
Be a Fan
Posted by Tanner Llewellyn at 12:13 AM