Our taxi from the airport dropped us off in Old San Juan shortly before 1pm on a Tuesday. After a greasy lunch in a restaurant off Calle Cristo we deposited our bags in our apartment for the next 3 nights and then made a beeline to Old Harbor Brewery.  They had 5 beers available and we did tastings of them all.  The beers were surprisingly good; on par with the breweries here in Virginia. My favorite was the Coqui Lager.  Laura's favorite was the Kofresi Stout.  Old Harbor had these cool 2-liter cylinder tube-shaped pitchers with an ice chamber and its own spout, but we weren't feeling that ambitious yet. 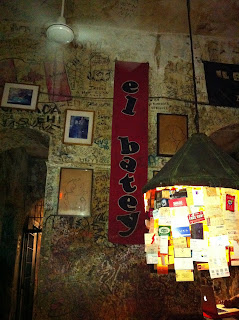 Later that afternoon, after a stroll along Old San Juan's cobblestone brick streets and a rudimentary pina colada in a place claiming to have invented the drink, we would find ourselves in El Batey, a locals' dive bar near to where we were staying.  No pina coladas here!  Just cheap Medalla Lights and rum with pineapple juice.  For a grungy place, El Batey leaned intellectual and had an old-school jukebox on which I programmed some Grateful Dead, Miles Davis and more.  There was graffiti and other scribblings on the walls that served as avante-garde art. After El Batey we made a mid-evening jaunt to the randomly chosen El Patio de Sam for some bar food before turning in fairly early.
Street noise and a poorly air conditioned apartment had us up early, and after a filling breakfast of eggs/bacon/toast and strong coffee, we headed off to see the two forts which dominate the old part of the city: Fuerte San Cristobal and El Campo Del Morro, dating back to the 1500's.  The towers, monumental walls, dungeons, underground tunnels and large manicured grounds of the two fortresses took a few hours to explore. Walking past the photogenic La Perla slum in between was interesting as well (attention tourists: do not enter La Perla).  Coming out of El Campo del Morro we walked on a part of the El Morro Trail and saw the San Juan Gate.
After all that time in the burning sun, we went to Cafe Berlin for lunch and frozen drinks...with rum please.  Cafe Berlin offers healthy, creative, vegetarian-inclined food.  Following lunch, an afternoon nap was in order.  Post-nap we went for drinks at Nono's (decent beer selection, "so bad it's good" 80's music playing through speakers) and Ostra Cosa (indoor/outdoor bar, aloof staff). Neither place blew me away but they were worth checking out I suppose.
We continued to eat well that Wednesday when we chose Hotel El Convento's El Picoteo restaurant for dinner.  El Picoteo specializes in tapas, and we got the paella -- excellent!  They also make a mean pina colada.  After a break we went to The Mezzanine at St. Germain for coffee, which led to cocktails (I had a gimlet, Laura had an old-fashioned), which gave way to shrimp and pineapple kabobs and lively conversations with some other patrons.  There was also a guy playing Spanish guitar and a poetry reading while we were there.  I liked that place.
That was Wednesday.  On Thursday morning we had a taxi drop us off at a rural stretch of beach about 10 miles east of San Juan called Pinones, known for its ramshackle food stands selling all that good, fried, Puerto Rican food like alpacurrias, tostones and empanadillas.  The vendors weren't quite up and running when we first got there, so we walked a few kilometers back and forth along the beach-side path through the mangrove forest before sampling as much of the unhealthy food as we could stomach.
Pinones was deserted when we were there, but I heard that it can be a pretty hopping party-zone on weekends. After a while we called the taxi driver to pick us up and he was there promptly.  The fare was $25 each way and, in hindsight, this side trip was probably not worth it, but it satisfied my curiosity about Pinones.
After returning to Old San Juan we went in search of the museum devoted to cellist Pablo Casals (note it is now located on the 1st floor of the Cuartel Ballaja).  Once we finally found it, the Pablo Casals Museum was a little underwhelming, but the Museo de Las Americas on the 2nd floor of the same grand building was worth visiting.  It was mid-afternoon when we left the museums en route to a taphouse called La Taberna Lupolo that Laura had just remembered reading about. We found the place, but they don't open until 6pm so we spent some time back at our apt. playing banjo and ukulele. 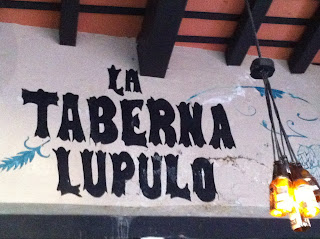 Besides Old Harbor Brewery, La Taberna Lupolo is the place in Old San Juan that every beer lover should darken the door of.  This hipster-friendly suds haven has over 50 beers on tap, plus many more in bottles, and they let you sample before getting a pint on draft.  I had a red ale, a black IPA and a German alt bier. It was all good.  We almost ate dinner there, but decided to go to Hotel El Convento's Pizza e Birra restaurant instead.  The pizza was awesome and there was even some left over the next day for a morning snack!
On Friday we left Old San Juan on a small twin-engine aircraft for a 30 minute flight to the island of Culebra.  I suppose we weren't very good Puerto Rico mainland tourists, because instead of booking a tour of the El Yunque Rainforest or seeing the biobay in Fajardo, we just hung around Old San Juan for three days and nights, save for the excursion to Pinones.
We put off going to the Bacardi Rum Factory because we were supposed to return to Old San Juan for one final span of 24+ hours the following Tuesday and had planned on going then.  We also had intended to dine in one or two of the acclaimed Old San Juan restaurants on Calle Fortaleza during that last overnight, but once we got to Culebra we fell in love with the little island's casual charm and decided to stay there an extra day instead of returning to Old San Juan.  So, our original plan of 4 nights and 5 days in Old San Juan became 3 days and nights there.  Click here to read my follow up post about Culebra.


Email ThisBlogThis!Share to TwitterShare to FacebookShare to Pinterest
Be a Fan
Posted by Tanner Llewellyn at 1:01 AM