The pace of life started to slow down as soon as we touched down at Culebra's Aeropuerto, after a 30 minute flight from Isla Grande in San Juan that curved dramatically around the small island on its approach, offering the first glimpses of the incredible Flamenco Beach before snaking between two little mountains for a happy landing.
After collecting our bags from the plane we entered the tiny, dusty one room airport where a dog was sleeping on the floor.  The dog wasn't waiting to get on a plane.  He had apparently just wandered in the front door and was hanging out.  That was a good sign we had come to the right place.
Culebra, you see, is an overlooked jewel amongst a sea of higher-profile Caribbean destinations:  about 17 miles east of Puerto Rico's main island, and 12 miles west of St. Thomas.  Culebra is part of Puerto Rico, therefore making it pretty hassle-free for American travelers - no passport required and the same American currency is used.  Your cell phone will work here and you can drink the water with no problems.  Feel like Tweeting or Facebooking that picture of the rum drink you're enjoying?  Do it!
They say the best way to make a good impression is to just be yourself, and that's exactly what Culebra does at first glance. The seven-miles-long by three-miles-wide cay doesn't put on any airs.  There are no stoplights, no large resorts, no high-rise hotels, no chain restaurants, no department stores, and no cultural attractions outside of one museum that I never found to be open.  Just a few guesthouses, small hotels and self-catering rentals scattered throughout the island, plus some restaurants, gift shops and basic grocery/general stores.
There's only one beach with facilities of any kind (lifeguards, food kiosks, bathrooms, camping), but that beach - Playa Flamenco - is consistently ranked among the top ten beaches in the world.  That's where most people go and there are taxis ready to transport you from the ferry terminal to Flamenco Beach. Other secluded beaches with equally white sand and emerald waters, like the beautiful Zoni Beach (a nesting area for the endangered leatherback turtle), are waiting to be found; you just gotta poke around.  Water taxis can take you to even more pristine stretches of sand on smaller satellite islands, including Playa Tortuga on Culebrita.
It's all very, very laid-back and low-key. Come to think of it, this might be why it's so appealing to some, but not that popular with others who may be in need of more attractions, activities and night life.  Culebra has about 2,000 permanent residents: a mix of native Culebrenes, Puerto Ricans, and crusty North American expats.  Most everyone speaks English, but of course it's nice to learn some Spanish if you can.
People come to Culebra to wind down and take it easy - go to the beach, go snorkeling, go diving, go sailing, maybe go kayaking or hiking.  These sunny outdoor activities lend themselves to island drinks: pina coladas, painkillers, daiquiris, and Culebra's own special alcoholic milkshake the bushwacker, available at any of the island's bars or restaurants.  The regional cervezas, such as Medalla Light, Magna or Presidente, also taste much better than they should here. 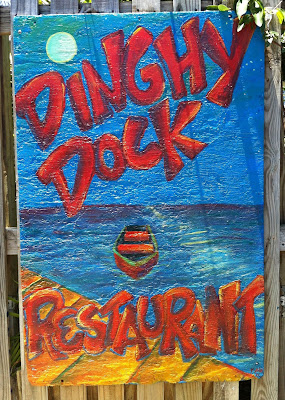 Most of Culebra's watering holes double as surprisingly good, eclectic restaurants where you can belly up to the bar in your tank top, swim trunks and flip-flops, and get a little light-headed on stiff drinks as you enjoy gourmet-level Puerto Rican and Tropical Fusion entrees, especially at local favorites like Susie's or The Dinghy Dock. How about a morning at the beach, followed by lunch and drinks at a place on the water, then an afternoon nap or hike before returning to the bar for happy hour and dinner, then finally some time spent star-gazing back at your cottage in the cool breeze before drifting off to sleep listening to the waves crashing and other indigenous sounds? If that sounds like fun then Culebra might be right for you.
Visitors get around by either renting a jeep, or my preference, a golf cart!  Seafaring folks might use a kayak or dinghy.  We realized that we were going to need a rental after attempting the 2-mile trek from Casa Yaboa to Zoni Beach, up and down hills in the hottest part of the day. We made it there and back on-foot, but not without vowing to get a golf cart the next day, which we did.  You can get anywhere on the island within 30 minutes in a golf cart, and you can't help but enjoy the ride in a buggy like that.  By the way, we stayed at the eco-friendly Casa Yaboa and this 3-unit getaway will be focus of my next post.
After happening upon Culebra I feel like the search is over for tropical destinations.  It checks all the boxes I need, and none of the ones I don't.  It's so much less glamorous than you expect the Caribbean to be, and that's what makes it so great.  We were supposed to stay for four nights before returning to Old San Juan, but after falling in love with Culebra we scrambled to change our plans and managed to stay there an extra day-and-a-half, which made all the difference and allowed us to really settle in and enjoy our surroundings on "island time".
Much of Culebra is protected as a wildlife refuge, and the independent-minded locals seem strongly against development, so chances are Culebra could remain a hidden paradise for years to come. You'll need bug spray to ward off the mosquitos and lots of sunscreen, but you probably knew that already.  If you run out of these items there are places to buy more, or just ask anyone and I'm sure they'll be happy to share.


Email ThisBlogThis!Share to TwitterShare to FacebookShare to Pinterest
Be a Fan
Posted by Tanner Llewellyn at 12:33 AM