We are going to be staying four nights in Old San Juan, Puerto Rico coming up soon.  Part of me wants to just hang out in Old San Juan the whole time...visiting the forts, walking along the cobblestone streets, checking out the brewery and some of the restaurants, relaxing in cafes, and maybe visiting the Bacardi Rum distillery or the botanical garden.
However, there are two attractions in Puerto Rico that people keep telling me to check out - the bioluminescent bays and El Yunque National Forest.  I am also interested in Pinones beach.  Although Puerto Rico's famous Bio Bays sound cool and beautiful, with their tiny bursts of teal-blue light on a moonless night, it's not something I'm personally interested in taking the time to see and we won't be there during a new moon. 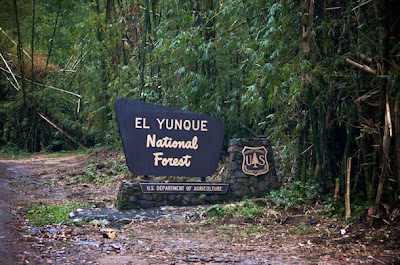 More my style is El Yunque National Forest - the only tropical rain forest in the entire U.S. National Forest system.  It's 28,000 acres includes many trails, waterfalls, plants and wildlife, and is host to about a million visitors a year.  It's at least an hour from San Juan and we're not planning on renting a car, so if we were to go it would likely be as part of one of the many adventure groups that take tourists there, often combining a trip to waterfalls with other activities like zip-lining, as part of a package that costs around $50 to $60 per person.
A visit to El Yunque would take up most of one of our four days on the island, and also considering the cost of the tour, I could easily talk myself out of going.  I've been on a jungle hike before, and I've visited National Forests with waterfalls before, so those would not necessarily be new experiences.  Should we spend an active day in El Yunque or just lounge around Old San Juan sipping on coffee and rum?  Will have to play that one by ear.
Something I definitely want to do though is visit a rustic area about ten miles east of San Juan called Pinones, which has a long stretch of beach, a 7 mile seaside trail, and dozens of inexpensive food vendors and open-air eateries serving up deep-fried Puerto Rican specialties like mofungo, bacalitos, alcapurrias and pasteles, washed down with fresh coconut water and cold beer.  The codfish, crab, plantains, yucca and more that are used in the food are said to be harvested from local sources.
Pinones would be a relatively short taxi ride away, and a fun place to grab some food and drink, and just chill out on the beach for a while, enjoying the local culture.  It sounds like a mixture of Winnifred Beach and the Boston Jerk Center in Jamaica.  I would not mind spending part of a day here.

With only four nights in Old San Juan we'll have to weigh our options.  Maybe once we get there we'll find a guide who can take us to El Yunque for a good price where we can just do a hike and skip all the other group activity stuff. Nature is best experienced in solitude. The model we've adopted in recent years is to just stay in one main area and see what we can on foot or via a short taxi ride. This has made for some relaxing, chilled-out vacations and that is all I am looking for nowadays.
Email ThisBlogThis!Share to TwitterShare to FacebookShare to Pinterest
Be a Fan
Posted by Tanner Llewellyn at 9:30 AM