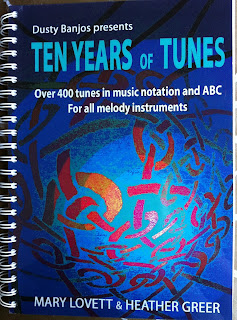 When I received my copy of Dusty Banjos Presents Ten Years of Tunes by Mary Lovett and Heather Greer with 400+ Irish session tunes arranged in sets, my first reaction was that this could be the best trad tunebook I've ever come across!  But let me back up for a minute and explain what Dusty Banjos is and what they do.

Dusty Banjos is a series of classes and sessions designed for adult learners (AKA improvers) who want to learn and play traditional Irish music with others.  It's a supportive, non-competitive atmosphere where all players and instruments are welcome to participate, regardless of level of ability (kind of like my Ashland jam/session, I hope).

The first Dusty Banjos session took place in Galway, Ireland in 2002, run by Mary Lovett of Community Music Crew.  Over the years additional Dustys sessions have been set up in Clifden, Ennis and other locations in Ireland.  Dusty Banjos also hosts the annual Cleggan Music Weekend each summer in the fishing village of Cleggan in Western Connemara, which looks awesome by the way!

The book Ten Years of Tunes was created to document the Dusty Banjos versions of tunes and sets from the repertoire accumulated over its first decade of existence.  The result is a broad-ranging snapshot of tunes that you're likely to hear in sessions in and around Galway and the rest of the world.  Tunes are organized by type - jigs, slip jigs, reels, hornpipes, polkas, slides, barndances, strathspeys, mazurkas, waltzes, marches, set dances, flings and airs. From there the tunes are further divided into sets of two or three - with sets grouped together on a single page whenever possible - or as single tunes.
The tunes are written in both music notation and ABC.  There's a brief section on how to read the music, as well as a number of photos, posters, articles and other content that I found interesting.  The book is printed on sturdy, glossy paper held together by heavy-duty spiral binding, making it easy to turn to the page you want to look at.  My favorite tune out of the book so far is Lucy Farr's Barndance, although I'm sure there are many more gems to be found in its pages. 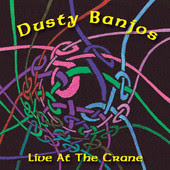 Dusty Banjos also does public performances as a band.  One of those performances was recorded in January 2009 to become the CD Live at the Crane.  Officially released live session recordings at a tempo conducive to playing along with are rare, so this recording is a valuable learning tool for student musicians.  These high-energy ceili band style settings are a little percussion heavy (snare drum and bodhran), but that makes it easy to tap your foot to and keep in time with.

Although Live at the Crane was recorded independently from the tunebook, the CD does contain close to 40 selections from Ten Years of Tunes, in the same sets as the book, so it’s a great learn-by-ear add-on to the written notation.  I’ve immediately taken a liking to two jigs on the CD – The Black Rogue and The Blackthorn Stick – but there’s a whole slew of session standards on the disc.  I don’t know of a better individual practice CD for Irish music.
The book Ten Years of Tunes and the CD Live at the Crane would make great additions to anyone's Celtic music library, but are especially suited to those who are just starting to attend sessions or who have been too shy to do so thus far.  The book can also help provide the framework for starting your own learners session, designed after the Dusty Banjos model!  You can order Ten Years of Tunes here, and Live at the Crane here.
Email ThisBlogThis!Share to TwitterShare to FacebookShare to Pinterest
Be a Fan
Posted by Tanner Llewellyn at 1:06 PM