Kay Landry, the sound guru for the listening room Ashland Coffee and Tea, often plays CDs by artists who will soon be coming there as the house music before and between sets.  The other night as a crowd gathered for a well-attended concert, Kay was playing the CD Unruly Heart by Ari and Mia Friedman, who will be performing on Thursday, March 14th at 8pm.  I watched as 3 people asked her what this music was.  I would have asked too if Kay hadn’t told me as I walked in that this was Ari and Mia.  Hearing that album for the first time as it played to the crowded room was a pleasant surprise.

I have since listened to Unruly Heart multiple times through, and I can say that Ari and Mia make the kind of pure music that I like to hear – Ari on cello and lead/harmony vocals, and Mia on violin and lead/harmony vocals (maybe some banjo too!).  I would describe their style as a refined take on traditional music, reminiscent of such contemporary bands as The Sparrow Quartet, Furnace Mountain Band, and The Stray Birds. 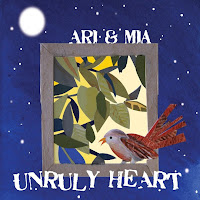 There’s a bit of a new acoustic, progressive edge to Ari and Mia’s sound – a possible product of their classical and Conservatory training – which they overlay with sweet-sounding vocals that show an American roots and early jazz influence.  The bulk of the album is original songs, so I get the sense that songwriting and composing is a big part of their musical inspiration.  However, they also do a nice interpretation of the fiddle tunes Shove the Pig’s Foot a Little Further into the Fire and Grubb Springs on the album.  Those tunes clean up surprisingly well!

Ari and Mia have a new album ready to come out soon, so I suspect they will be featuring new material this Thursday, but based on what I heard off the 2010 album Unruly Heart, I am now really looking forward to their performance, which will feature Owen Marshall on guitar.  Highly recommended!

Email ThisBlogThis!Share to TwitterShare to FacebookShare to Pinterest
Be a Fan
Posted by Tanner Llewellyn at 1:00 PM