One of Richmond VA's great musical treasures is a long running oldtime jam that meets at a Deadhead bar in the Fan every Sunday afternoon.  Even though the musicianship and BPMs are at advanced levels, the regulars are friendly toward newbies who "get it" and want to try their hand at sitting in with the ensemble and playing this music at breakneck speeds.

Besides being so welcoming, this jam is great because it is 100% festival style oldtime all the time.  Everyone in the group plays in unison and tunes are taken around several times.  No bluegrass songs, slow waltzes or other deviations are given a chance to infiltrate.  Plus, weird, crooked, seemingly obscure fiddle tunes are favored over the somewhat cliche Fiddler's Fakebook standards.  Additional tunes are always being added to the repertoire, so the more you attend, the more great numbers you are exposed to if you are up to the challenge. 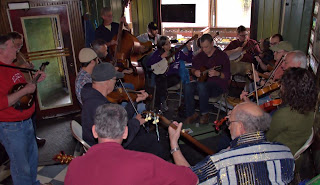 I don't think anyone even blinked when I first  showed up with my openback 1920's style tenor banjo last year.  For one they realize that tenor banjo does have a bit of history in stringband music, and two I didn't barge in and immediately suggest we play Kesh Jig or Friend of the Devil.  I quietly sat in the outer ring of the circle and tried not to look too confused as I noodled away on tunes I had never heard before.  The endorphin release I experienced on that first day, the first time I had ever really heard oldtime music in that way, is something I've been trying to recreate ever since!

There are other jams around town where one can play and sing a folk song, trading solos over chord changes, but the reason most people attend this specific oldtime jam is because playing traditional tunes in the keys of D, G, C, A and A-modal, with folks who are at a high level of proficiency in this specialized style of music, is exactly what they want to experience.  Even if repetitive fiddle tunes aren't your favorite thing, it can be great ear training and other practice.

The other day a woman showed up with a guitar and played for at least 30 minutes with us while we were in the key of A.  Then she suggested that we play and sing Roll In My Sweet Baby's Arms and began to play it (in D?).  Nobody joined in and the jam leader kindly explained to her that that wasn't exactly the kind of music we were here to play.  I was really, really happy he handled it this way, rather than bending the makeup of the jam to appease her request...and ignorance.  You've  got to uphold the standards of the jam.

Unfortunately for her, she reacted negatively, made some rude comments and immediately left.  I suspect that most people, having so broadly misjudged the nature and etiquette of a jam like that, would've at least stuck it out for a while.  We just continued doing what we doing - bringing to life Old Bunch of Keys, Saddle Old Kate, Road to Malvern, Bull at the Wagon, or whatever else it was that came next that day!  In another time and another place sure, I may have wanted to try out that song, but not there during this jam where the focus is on sounding out the main melodies to fiddle tunes together as a group.
Email ThisBlogThis!Share to TwitterShare to FacebookShare to Pinterest
Be a Fan
Posted by Tanner Llewellyn at 11:32 PM