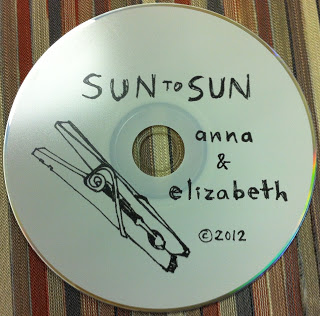 One CD that arrived in the mailbox a little too late for inclusion on my Best of 2012 List, but certainly deserving of the same recognition, is Sun to Sun by Anna and Elizabeth.  In many ways it’s the feminine answer to Eamon O’Leary and Jefferson Hamer’s Murphy Beds album that topped my list – a raw, sparse duo recording documenting the sound two people can make with just their voices and acoustic instruments. 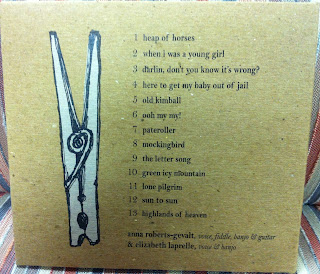 While the Murphy Beds have more of a Celtic center, Anna (Roberts-Gevalt) and Elizabeth (LaPrelle) are rooted in Southern traditional folk music - ballads, lullabies, tunes.  Music you might play around  the home on fiddle, guitar or banjo…for yourself and for others.  Sun to Sun contains 13 such songs from Virginia and Kentucky, learned from the repertoire of ballad singers such as Addie Graham and Texas Gladden.

Anna and Elizabeth are two women in their twenties living in Southwest Virginia.  The concern I usually have with young artists who perform old-time music is they get too wrapped up in sounding “old” and authentic, and what comes out can sometimes be a bit forced.  None of these contrivances seem to plague Anna and Elizabeth, who are natural and comfortable with their chosen medium (in a performance setting, they enhance the music with storytelling and original folk art). 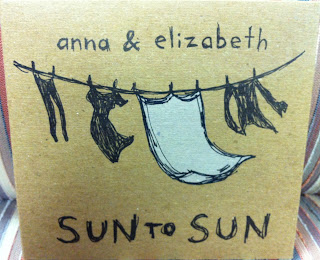 Anna and Elizabeth are not just curators of rural music and traditions, they are contemporary examples of how it can attune to the modern day.  Were it not for the fidelity, Sun to Sun might pass for something Alan Lomax captured on his tape recorder.  As they say in the CD booklet, "this music, for us, is tricky to separate from the sounds of crickets in the mountains all summer, the laughter between tunes in our kitchen, the patience of small stitches, the sight of an old woman flatfooting with her walker".

Email ThisBlogThis!Share to TwitterShare to FacebookShare to Pinterest
Be a Fan
Posted by Tanner Llewellyn at 3:35 PM