I conducted a study of the tunes in L.E. McCullogh's 121 Favorite Irish Session Tunes and the 60+ tunes  in John Walsh's Session Tunes pdf.  A total of 185 tunes from the standard repertoire.  Surprisingly, 100% of the tunes in both collections were written using a key signature containing either one or two sharps.  (One sharp was always F# and two sharps was always F# and C#).  I suppose this means that the notes Eb, F, G# and Bb aren't needed to play the basic melodies of any of them.

I'm a little surprised that no 3 sharps (A-major), 0 sharps (D-dorian) or 1 flat (G-dorian) tunes were included.  However, the reason that tunes in 1 or 2 sharps dominate might be because tin whistles, flutes and pipes are basically D instruments and most lack a G# key which is needed for tunes in A major. So, Irish tunes that resolve to A tend to have a G natural due to the lack of the G# note on some of the important instruments. 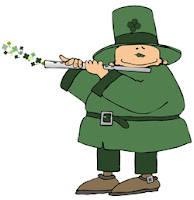 It should be noted that there are lots of A-major tunes, even though they weren't included in the two tunebooks I looked at.  A-major is popular with fiddlers who don't have the same G# restrictions.  It's also worth noting that the Irish tunes which sound "minor" are much more likely to be Dorian than the classical minor (Aeolian) mode.  So when someone says "this tune is in Aminor" it's often technically inaccurate.

The Irish repertoire isn't quite as restricted as these findings seem to indicate, as I know there are gems in F and C waiting to be found.  However, the basic repertoire does primarily consist of tunes with home notes of D, G, A and E. For me, since I'm fairly new to the tradition and haven't yet developed a keen ear, being able to make educated guesses about the likelihood of a tune's tonal center can help me narrow things down in a session setting.  Guessing that a tune is in D is like answering B on a multiple choice question.  The law of averages, I suppose.
Email ThisBlogThis!Share to TwitterShare to FacebookShare to Pinterest
Be a Fan
Posted by Tanner Llewellyn at 10:27 AM