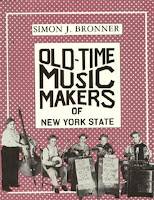 Not too long ago I got a used copy of a book from 1987 called Old-Time Music Makers of New York State, by Simon J. Bronner.  The book examines the fiddling and old-time music of rural upstate New York during the 19th and 20th centuries.  Old-time music is usually associated with the Southern Appalachians, so it's interesting to find a book that addresses its role and meaning to the people of this region, whose fiddlers had just as much of an impact on their communities as their counterparts in Kentucky or Tennessee.

I would like to sit down and read the whole book, but so far I've just been perusing it and looking at the photographs and transcriptions of old fiddle and dance tunes.  It contains many great tunes that were part of the Yorker tradition, including Haste to the Wedding, Money Musk, Durang’s Hornpipe, Rickett’s Hornpipe, Irish Washerwoman, Rakes of Mallow, Miss McCleod’s Reel, Devil’s Dream, Turkey in the Straw, and more.

Below is the book's transcription of Blackberry Quadrille.  As you can see it is in 6/8 time, making it a fun, Northern sounding tune that you could probably toss into a set of jigs or slides at an Irish session without raising too many eyebrows.  It would also make a great contra dance tune, obviously.

According to this video's description, "Quadrilles, or dances in square formation of four couples facing each other, evolved in France and became popular in Britain, Ireland and America in the 19th century. It was first danced publicly in Dublin in 1816. It is possible that quadrilles were brought back to Ireland by soldiers returning from the Napoleonic wars. The Irish dancing masters increased the speed to that of Irish dances of the time and modified the dance with native Irish dance steps".

I hope you enjoy learning this tune!
Email ThisBlogThis!Share to TwitterShare to FacebookShare to Pinterest
Be a Fan
Posted by Tanner Llewellyn at 12:46 PM

Labels: Tunes of the Week