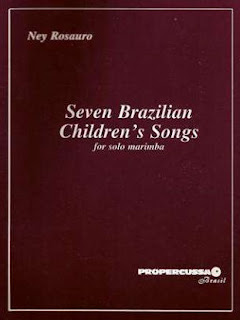 I was listening to the first hour of the public radio show Performance Today on July 15 when I heard some really cool sounding music that turned out to be "Brazilian Fantasy: Bach in Brazil" by Ney Rosauro.  It was an in-studio live recording of the Seattle Marimba Quartet performing this nine minute piece.  I loved the melodies and rhythms and it immediately occurred to me that I could maybe adapt parts of this for tenor banjo.

I learned that Ney Rosauro is a Brazilian composer, percussionist and vibes/marimba player.  His Brazilian Fantasy is a duet for two marimbas that mixes original music, traditional Brazilian folk tunes, Bach melodies/chord structures, and melodies by Brazilian composer Carlos Gomes.

Further research on Ney Rosauro uncovered a project he did about twenty years ago called "Seven Brazilian Children's Songs for solo marimba".  These are kind of like études he wrote based on melodies and rhythms from Brazilian folklore, for the purposes of developing basic four-mallet (marimba) technique and increasing the musicality of the person practicing them.  Despite (or because of) this, they sound like the kind of melodies I like to play.

These Children's Songs are numbered 1 through 7 (there are seven of them) and you can buy the sheet music from Lone Star Percussion.  Upon listening, my instant favorites are No. 3 Pirulito que Bate Bate and No. 6 A Moda da tal Anquinha.  The music for Pirulito que Bate Bate is available for free download on Ney Rosauro's website.  Here are some YouTube videos of a young woman playing these songs very well.

Although these pieces were written for marimba, for the most part they can be played as tunes on tenor banjo or any chromatic instrument.  Sometimes what I hear as the melody is actually written as the bass-line, but to me it still serves as the melody whenever there isn't a simultaneous treble clef sound happening.  This is especially true for A Moda da tal Anquinha.

For Pirulito que Bate Bate there is a sequence of double stops at the end of one section that doesn't quite translate in an interesting way when played on the tenor banjo.  I've been experimenting with playing a little melodic run in its place.  At least part of this melodic run is based on a transposition of something that is happening elsewhere in the piece, so that may be why it seems to fit.

Eventually I would like to learn more of these Brazilian Children's Songs, or go back to the Brazilian Fantasy: Bach in Brazil piece that sparked this interest in the first place.  For now I'm enjoying making two-part fiddle tunes out of Pirulito and Anquinha.  Here are my takes on them as of this morning.

Email ThisBlogThis!Share to TwitterShare to FacebookShare to Pinterest
Be a Fan
Posted by Tanner Llewellyn at 1:19 PM