Taking place September 20-22 along the banks of the Shenandoah River in Berryville, VA, Watermelon Park Fest is one of the last chances of the season to get outdoors and see some great music while camping.  This year marks the ninth annual Watermelon Park Festival, although the park’s history goes back much farther:  it was the site of the first US bluegrass festival, held in 1960.  Watermelon Park continued to host bluegrass festivals throughout the '60s and '70s.  After a 25 year hiatus, organizers Shepherds Ford Productions brought the music back to Watermelon Park in 2004.  The festival has been growing ever since.

A strong roots music tradition remains although it has expanded beyond bluegrass to include old-time, Americana, Celtic, gypsy jazz and beyond, as seen in the 2012 lineup, which includes:  The Del McCoury Band, Tim O’Brien, Larry Keel and Natural Bridge, The Hot Seats, The Two Man Gentlemen Band, Furnace Mountain, Bruce Molsky, Elizabeth Laprelle, The Woodshedders, Dirty Bourbon River Show and more.  Performances are staggered between the main stage and the dance tent so they rarely overlap.  Check out all the bands here. 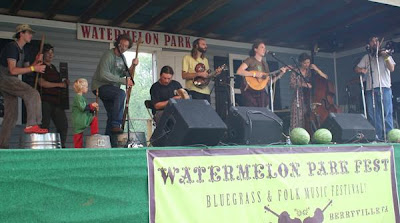 In addition to the band performances, there’s also mandolin, guitar and band contests, workshops on partner dancing, old-time fiddling, folk song, banjo, flat-footing and clogging, plus open jams for both slow and advanced players, as well as evening dances!  Not to mention the impromptu jam circles sure to spring up throughout the camping area.  Food and craft vendors will also be on hand.


Bring the kids!  Youngsters 12 and under are admitted free.  Children’s activities include a watermelon feast and boat build, poster making, storytelling, musical shadow puppets, toy sword making, printmaking and watermelon carving.  Watermelon Park strives to be an environmentally friendly festival, incorporating green practices with the goal of being a zero waste and carbon neutral event.  Vendors and exhibitors distribute only recyclable or compostable materials. 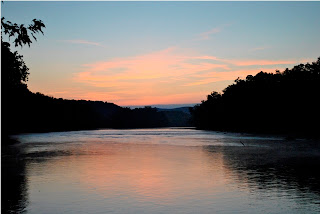 Watermelon Park is located at 3322 Lockes Mill Rd., Berryville, Virginia 22611.  About an hour from DC and 2 hours from Richmond or Charlottesville.  Tickets range from $40-$60 (+ will call fee) for a single day pass to $80 (+ will call fee) for the entire weekend.  Tent camping is included.  Early check-in on Wednesday is an option for weekend ticketholders.

I’m looking forward to a great weekend of music, fun and happy camping in the Shenandoah Valley at Berryville’s Watermelon Park Fest!
Email ThisBlogThis!Share to TwitterShare to FacebookShare to Pinterest
Be a Fan
Posted by Tanner Llewellyn at 5:04 PM