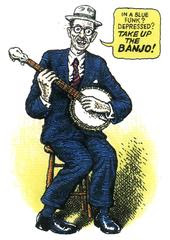 It’s not unusual to tune a tenor banjo GDAE (one octave lower than a mandolin) and use a plectrum to play Celtic jigs, reels and hornpipes.  This is called Irish Tenor Banjo.  However, it is a bit unusual to use the same instrument to flat-pick old-time fiddle tunes, as I am trying to do.  Don't worry - I play the Irish stuff too!

When I first started I could find little or no examples of Old-Time Tenor Banjo players or instruction material.  So basically I just referred to information on mandolin, Irish tenor banjo and flat-picked guitar to learn tunes and picking.  But, over time I have become aware of a few players.
For example, Josh Bearman of Richmond, VA.  His repertoire is almost 100% American (none of that “diddly-dee” Irish stuff).  Josh also plays clawhammer banjo, mandolin, upright bass and guitar.  His tenor banjo playing leans toward the more ragtimey spectrum of old-time and can be heard on recordings by his band The Hot Seats.  Josh will sometimes play his 1920's Vega tenor banjo in old-time jams at places like the Galax Old Fiddler’s Convention.  He’s one of the few people teaching old-time tunes on tenor banjo.  (If you're in the Boston area Vic Rawlings teaches this style of tenor banjo/tenor guitar out of his home studio in Somerville, MA).
Another person I would consider to be an old-time tenor banjo player is Clyde Curley.  Clyde can be heard on some of the Portland Collection CDs.  His tenor banjo selections gravitate toward contradance tunes.  Clyde is also known for his old time mandolin album Clyde Curley and The Oxymorons.  Tenor banjo is not an instrument he plays a lot any more, but I really enjoy Clyde's playing when I get to hear it.
Tenor banjo player Claudine Langille has put out a CD where she plays a selection of Irish, Scottish, old time, and original tunes solo on her Vega Whyte Laydie tenor banjo.  I think it was originally intended for her students at Swannanoa, but it’s a good resource to hear some stripped down Appalachian tunes being played on T.B.
Irish tenor banjo player Enda Scahill dabbles in American music as well, as can be heard on recordings with the Brock McGuire Band and his new project We Banjo 3 - Roots of the Banjo Tree.  Enda’s Irish Banjo Tutors Volume I and II are indispensable learning manuals for 4-string players.  His concepts spill over into old-time playing for sure.
Another tenor banjo player I associate with old-time is Sam Bartlett.  Sam's tenor banjo recording Swamp Ceili contains a fusion of Irish and American styles.


Jody Platt also comes to mind.  She plays tenor guitar instead of tenor banjo, but Jody is perhaps the best example of someone using a 4-string 21” scale instrument to play alongside old-time fiddlers and clawhammer banjo players in a jam setting.  I met Jody at Clifftop this year and got to see her playing tenor guitar with Riley Baugus and Emily Schaad.  It doesn’t get better than that!  Her technique can be directly applied to tenor banjo.  Her son Jamie makes some excellent tenor guitars that any tenor banjo player would drool over!
Of course if you dig a little deeper you’ll find Lynn “Chirps” Smith, who teaches a mandolin class at the Augusta Old-Time Week that is open to tenor banjo players in the mandolin tuning.  There’s also Leroy Larson who plays Minnesota Scandinavian music on tenor banjo – a not-too-distant relative to old tyme.  In Dan Levenson’s book Old-Time Festival Tunes for Fiddle and Mandolin he mentions that everything in the book can be applied to GDAE tuned tenor banjo.  I can also think of recordings of Turkey in the Straw and Golden Slippers by Irish tenor banjoist John Carty, versions of Stone’s Rag and Ashokan Farewell by Doolin, Ireland based tenor banjo wiz Kevin Griffin, and Bruce Molsky’s recording of the old-time tune Richmond featuring Mick Moloney on tenor banjo.  I think Norman Blake’s Natasha’s Waltz album has a tenor banjo.  Marcy Marxer has been known to play such tunes as Kitchen Girl on her 4-string Gold Tone cello banjo - which is basically just an extra large tenor banjo.
One also must not forget the influential black tenor banjo player Elmer Snowden, who used the GDAE tuning to play ragtime and early jazz tunes decades before Irishman Barney "Banjo" McKenna strung his tenor this way.  Some older bands featured tenor banjo as a rhythm instrument, similar to how banjo uke is used today.  These include Woodhull's Old Tyme Masters, The Allen Brothers, Seven Foot Dilly, the Grand Coulee Old Tyme Jug Band, the Brooklyn Corn Dodgers, the Correctone Stringband, R. Crumb and His Cheap Suit Serenaders, and more recently Sheesham and Lotus.  I’d love to hear about other artists and recordings I have failed to mention!


The people listed above are why I continue to learn fiddle tunes and show up to old-time jams with my tenor banjo – an instrument that at first glance may seem out of place but is actually consistent with hillbilly music tradition.
Email ThisBlogThis!Share to TwitterShare to FacebookShare to Pinterest
Be a Fan
Posted by Tanner Llewellyn at 11:07 PM