A couple years ago I ordered a custom left-handed tenor banjo from Tommy George of George Banjos in Somerville, TN.  I like it so much that about six months ago I asked Tommy if he'd build me another one with a slightly different design.  That 2nd banjo is now nearing completion.  He's just added a coat of sealer, dulled-down the metal spunover rim, and this week he'll be trimming out the neck.  As a special feature Tommy is adding a unique inlay of my choosing on the headstock.  He just sent me this picture! 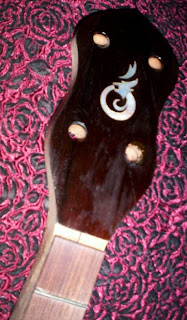 That logo/inlay is inspired by a road sign I saw when traveling in Iceland in 2008.  There's a lake there said to contain the Lagarfljót Worm, also known as the Icelandic Worm Monster - a creature similar to the Loch Ness Monster.  While driving around Lagarfljót lake in Egilsstaðir I noticed these signs which I think were meant to indicate good vantage points for viewing the worm.  Unfortunately I didn't see the Lagarfljót monster but I did come away with a cool symbol!
I'm fortunate to have found Tommy George, as he is an excellent craftsman willing to take on the challenge of making a tenor banjo for a reasonable price.  A Nashville based TV show did a segment about George Banjos and posted it on YouTube. Here's that video.

I'm looking forward to playing this "Worm" banjo!
Email ThisBlogThis!Share to TwitterShare to FacebookShare to Pinterest
Be a Fan
Posted by Tanner Llewellyn at 1:23 PM