A Week in New Orleans Without Drinking...Not! 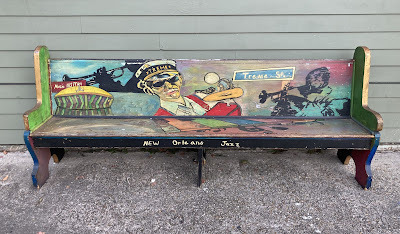 I had ambitions of being able to write a post titled "A Week in New Orleans Without Drinking". That ended up not being the case. There was also a remote chance of being able to title it "A Week in New Orleans Eating Vegan". That definitely didn't happen. I think that's OK though, for my first time visiting The Big Easy, to get to experience it more fully as Jah intended.

Day One involved catching some drumming in Congo Square, preceded by a drink at Hotel Monteleone's revolving bar, and seeing music at Kermit's Treme Mother In Law Lounge, including an appearance by Mr. Kermit Ruffins himself. Finishing with a cheesy piano man at the hotel. 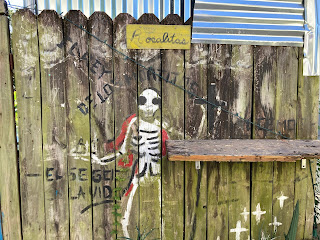 Day Two started with a long walk to a delicious breakfast at Elizabeth's in the Bywater (9th Ward) followed by more footsteps over the Rusty Rainbow bridge and a stroll through Crescent Park. A light lunch was had at Alma Cafe before seeking out Banksy's "Umbrella Girl". This led to a fortuitous side jaunt into Priestess Miriam's Voodoo Spiritual Temple. After a mid-day nap, a classy dinner was experience at the esteemed Commander's Palace, with a post dinner come down at Joey K's over on Magazine Street. But before any of that we snuck in a glimpse of the ghost table at Muriel's. The evening was completed with attendance at the weekly Super Jam back over on Frenchmen Street led by drummer Gene Harding, and getting to know Josephine - a 75 year old life-long N'awlins resident who we met outside Cafe Negril. A chance meetup with a well-dressed elderly reefer man on the walk home and a Deadhead named Ellen and her little dog too caused things to take a late night New Orleansy turn.

Day Three's eating began tentatively with a curry burrito consumed before the church bells struck noon. I believe Dr. Bob's Folk Art was next, where the man himself gave us some Crescent City insider tips. A walk through the French Market led to an impromptu trip to Algiers via the ferry. The Bywater Brown ale at the Crown and Anchor pub tasted to me, in that moment, like the best beer I have had in years. After returning to the city proper, dinner got a little spicy at Silk Road in the Marigny. We briefly saw some music in the Spotted Cat before taking a long walk and leap of faith up to Sweet Lorraine's which resulted in randomly meeting a couple famous - and I do mean famous - musicians, and actually hanging out with one of them who proved how "not sober" he was! 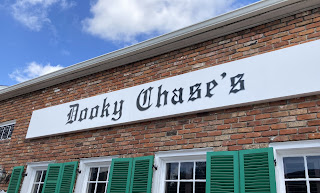 Day Four started with a poignant walk through Treme to view the Tomb of the Unknown Slave and a tour of the recently relocated Backstreet Cultural Museum. An early lunch at Dooky Chase's was probably the best meal of the week! Finished off with peach cobbler, of course. The rest of the day included stops at the Jazz Museum, a local brewery, and a risky yet remarkably good spur-of-the-moment for-lack-of-a-better-option meal at a Mexican/Honduran(?) restaurant somewhere in the French Quarter that I'll never be able to find again.

Day Five started with a checkbox: beignets and cafe au lait at Cafe Du Monde! Then another quintessential NOLA requirement: riding a streetcar. This one led to City Park which afforded us the opportunity to see nearby Holt Cemetery before communing with nature in the park's lush botanical garden. Lunch was had at the world renowned Willie Mae's Scotch House and it was worth the wait. After lunch, we returned to the French Quarter for an afternoon cocktail at Hermes Bar (Antoine's). Another afternoon cocktail or two was enjoyed at May Baily's Place. The not-so-secret restaurant/bar Coop's hit the spot for dinner. The remainder of the evening included encounters with old-time street musicians, music at the Spotted Cat, and meeting a local named Randy who helped continue the good-vibe streak. 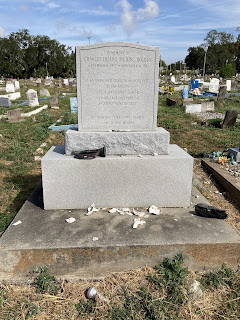 Day Six involved breakfast at Cafe Envie. Next on the list was a daytime walk along Magazine Street in the Garden District. A little bit of shopping, a check-in at Simon's art gallery and seeing some famous homes before ultimately landing in a too comfy neighborhood bar called Tracey's to watch a baseball game. Dinner was back in the Quarter at the only place we could find agreeable: Hermes Bar. As the dinner hour turned to evening we secured balcony seating at a nearby bar/restaurant at the intersection of St. Louis and Royal to people watch and bend an ear to listen to violinist Tanya Huang down on the corner below. Eventually, after some requisite Voodoo Juice, we made it back down to street level to get a closer look/listen to Tanya and met a nice fellow named Larry.

Day Seven. The last day. A slow start. Six days of being a tourist in New Orleans had started to leave its mark. For breakfast, which was actually an early lunch, we returned to Coop's which didn't let us down. They don't fuck around at Coop's. Then it was off to Loretta's in search of pralines. The best in the world? Yes, maybe. An early unexpected dinner at Nonna's made sure our bellies were full for the evening's final act: a couple three sets of music by the incredibly talented Aurora Nealand! 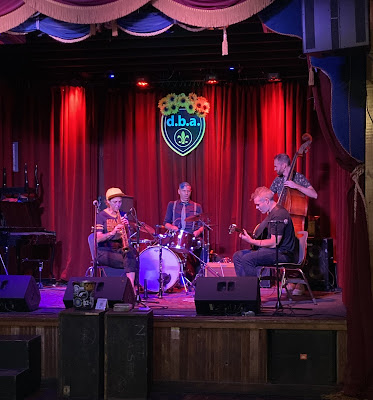 This write-up has mostly been for my reminiscence. In Summary:

Local personalities: Dr. Bob, Simon of New Orleans, Priestess Miriam. And salt of the earth locals by the names of Ellen, Josephine, Randy and Larry.

The main things that I had on my list that I didn't do or see: a steamboat cruise on the Mississippi, the Tree of Life (Etienne de Boray Oak) and Labyrinth in Audubon park, street musician Doreen Ketchens on Royal Street, a really good po' boy, a muffaletta, the Ogden Museum of Southern Art, Folk Art Zone in Algiers, Vaughan's Lounge, and Snake and Jake's Christmas Club Lounge. Next time.

Email ThisBlogThis!Share to TwitterShare to FacebookShare to Pinterest
Be a Fan
Posted by Tanner Llewellyn at 6:17 PM