I did an okay job keeping up with new releases this year.  Okay enough that I didn't feel compelled to do any end of year cramming or searching. I simply looked back at the list I'd been maintaining all year long and picked my overall favorites, which gave me a list of 18 choices. From there I narrowed it down to these 10.

I knew of Neal Casal primarily through his instrumental band Circles Around the Sun. However, when he passed away in 2019 at the age of 50 I had no idea that he was also an expert lyricist and songwriter. Thankfully, Neal's friends and admirers got together to record over 40 of his songs as a tribute. I wouldn't normally include a various artists compilation like this on an end of the year list, but it's too good to leave off. 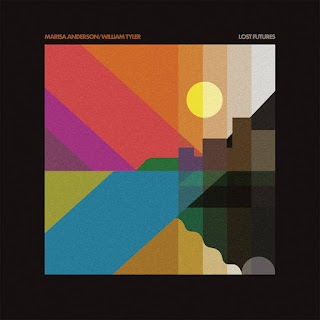 Both primitive and sophisticated is this meeting between two guitar greats: Marisa Anderson and William Tyler. I listened to it while driving along the Oregon Coast and it was the perfect soundtrack to that road trip and landscape.

Heaven and Holy by Painted Shrines

This is perhaps the most pop-oriented selection of the ten on this list. Jangle-pop that is. The guy from Reds Pinks and Purples teamed up with the guy from Woods to create this little gem of an album. Deceptively psychedelic.

Charnett Moffett is not a name I had heard of before and bassist-led jazz releases are not usually something I am seeking out, yet I knew this was a best of year candidate from the moment I clicked play. Moffett has an understanding of Harmolodics, as taught by Ornette Coleman. Few people can even explain what Harmolodics is, much less utilize it in an effective way, but the way Moffett conducts the instruments and positions the role of the bass within this ensemble may provide some clues.

I don't know what this is! I just like the sound of it. Especially the drumming. It quickly became my go-to exercise music for the year.

Searching for the Disappeared Hour by Sylvie Courvoisier and Mary Halvorson

Despite being a long-time fan of guitarist Mary Halvorson, this is the first time I've gotten to hear her play with pianist Sylvie Courvoisier, or any piano player. The piano adds a richness which I find soothing. While still being very abstract and difficult to comprehend, it may be ever so slightly more conventional than what we are used to.

Tommy Guerrero is someone I admire: a DIYer who can be counted on to put out catchy, melodic, instrumental albums time and time again. Don't mistake this pro skater for being an amateur musician. This is pretty much the sound. The epicenter. Exactly what I am looking for in music.

Children In Space by Guess What

I detect some major Sun Ra vibes from this album. Big, spacey tones for a keys and drums duo.

Years ago I saw Duck Baker play a solo show in Richmond, VA but I don't recall him being this out. We're talking Derek Bailey level out. Could this be easy listening in disguise? Something keeps me coming back to it.

I was watching a Phish webcast this summer and during the setbreak you could just make out the house music that Phish's sound person was playing at the venue. It sounded really good to me at the time but I had no idea what it was. After a while I thought to try the Shazam app and it was able to tell me it was a song by Altin Gün. I checked again a few minutes later and it was another song from the same Altin Gün album called Yol. This would be good music to put on the jukebox in the Star Wars Cantina.

Email ThisBlogThis!Share to TwitterShare to FacebookShare to Pinterest
Be a Fan
Posted by Tanner Llewellyn at 7:44 PM