Goose - My (and Your) New Favorite Band

At any point over the last 30 years, if someone had asked me who my two favorite bands were the answer would have been The Grateful Dead and Phish, or Phish and The Grateful Dead. The same answer either way. When Jerry Garcia died in 1995 that pretty much made The Grateful Dead a "past tense" band for me, leaving Phish as the unrivaled top-favorite "present-tense" group.

Number two behind Phish was always a distant but still fervent second, occupied at various times by bands such as Leftover Salmon, .moe, String Cheese Incident, Dark Star Orchestra, Yonder Mountain String Band, Sound Tribe Sector Nine, My Morning Jacket, Dr. Dog, and Ween. None of those ever came close to knocking Phish off its perch. Now, out of nowhere, there is a band rising higher than any of those contenders that came before it, and that band is Goose. 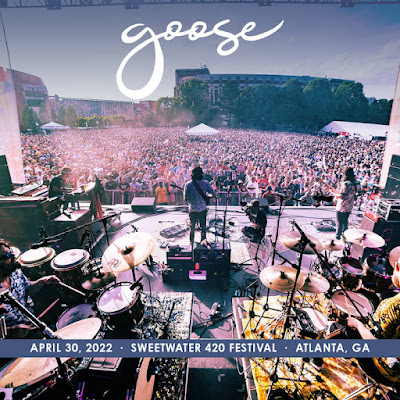 I believe my first exposure to Goose was while watching their debut at the 2019 Peach Music Festival where they struck me as a talented yet generic jamband. Another in a long line of generic sounding 2nd or 3rd tier jambands not worth my time. Fast forward to spring of 2022 and that general impression remained about the same. I actually hadn't thought much about Goose at all. That changed when I again found myself watching a live festival performance, this one being the April 2022 Sweetwater 420 Festival. No question Goose had gotten better, but I was also now more receptive to what they had to offer. I soon watched that Sweetwater 420 set a 2nd time and liked it even more. After that it's been non-stop Goose.

I was wrong to write off Goose as a generic jamband at some minor-league level. Yes they are most definitely a jamband and in fact that is their number one attribute. They jam. They jam at a level that rises above all the criticisms and comparisons to some new territory that is both familiar and unique. You can get into it. You can get lost in it. It is not going to let you down. I love how Goose goes straight to the epicenter of the genre (if I may), then works its way back out from there. They scratch that itch, whether you currently have poison ivy or got rid of that rash years ago. They scratch it.

Jamming is one thing that sets Goose apart but it is not the only thing. More important than the jams themselves are the foundations on which those jams are set and for Goose those are very stable blueprints. They flat out have some awesome songs. I feel like I am just getting to know these songs and there are probably some I am still unfamiliar with. And at this point instant classics are constantly being introduced to the repertoire. Was Animal really just played for the first time on 6/11/22? I guess I'm not that late to the party.

You have to love the song first before you can really love the jam. To use Phish as an example, a 20+ minute Soul Planet or Set Your Soul Free is never going to feel as good as a 20+ minute Ghost or Tweezer. With Goose I don't know if we are on hallowed "Tahoe-Tweezer" style ground, but they seem to at least get to "Ruby Waves" level on a regular basis, if you know what I mean.

Another thing that sets Goose apart from, well...everyone else, is that they have a really good singer. Guitarist Rick Mitarotonda can actually sing in a way that would appeal to the casual pop music listener, and that is a rarity in the jam-dominated live music world. I put him in the same league as Jim James or maybe even Thom Yorke when it comes to that. I'm surprised that I don't hate Rick's use of the autotune/vocoder thing but in contrast I have even come to like it in a weird way. I see it as a vocal tool he uses to his advantage similar to how Jim James would use reverb when My Morning Jacket first came out.

The overall sound of Goose is appealing, regardless of the song or the jam they are in. It's not all rock or jam all the time. For example, there are hints of bossa nova and calypso, hints of middle eastern scales, Paul Simony grooves, hummable hooks and melodies, and way, way more to it than that. And of course there seem to be passing references to all your favorite other bands. Yeti could totally be a .moe song. Hungersite would make for a killer My Morning Jacket number. There's some song I don't know the name of yet that reminds me of 46 Days. And so on. I've come to view these as good things.

Rick is a good, might I say, great guitar player. I don't yet know where he falls in that tradition or whether it's just within the jam world or the larger world of guitar, but I can say that he really shines during the acoustic Radio City Music Hall sets from June 2022. He also puts off an aura of being someone that you can put a lot of faith in and that is a characteristic he shares with Jerry and Trey.

The piano sounds in Goose, when the guy Peter plays them, are extremely tasteful. I cannot believe that he didn't start playing piano until he joined Goose in late 2017. Unfathomable and quite impressive. (Referring to him as "the Peter guy" is one step up from his former title of "mustache dude". He's growing on me and I'm sure at some point soon his goofiness will become endearing).

The twin drumming of Goose - drum kit plus percussion - is something I find myself focusing on. It's easy to draw comparisons to Widespread Panic there. Goose seems to have cut and pasted that drum+percussion vibe and planted it in the middle of what they are doing and it works very, very well for them.

However, the thing I probably find myself listening to the most in Goose is the bass. I don't know why this is. The bassist's name is Trevor Weeks or Weekz. Anyway, it's not like his playing is real flashy and it's certainly not a reproduction of Phil Lesh or Mike Gordon. If anything it's like a better Rob Derhak but I admit that's a lazy and unfair comparison.

Phil Lesh, and to some extent Mike Gordon, are always "soloing"... adding bass counterpoint to the lead line. This particular style of playing has heavily (and perhaps negatively) influenced many that are trying to follow in those footsteps. Trevor doesn't really do this. He is mostly supportive, adding nuance in a more standard bassist function, and yet is still very prominent in the mix making it very easy to hear what he is doing. Very tasty.

OK I've rambled enough. I was originally only going to write the first two paragraphs above but kept adding more thoughts that weren't really very well fleshed out. At this point I'm only like three months in to really listening to Goose so these impressions could definitely change with time.

Email ThisBlogThis!Share to TwitterShare to FacebookShare to Pinterest
Be a Fan
Posted by Tanner Llewellyn at 7:47 AM