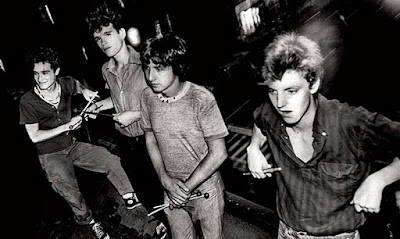 Even though their entire recorded output is covered in less than 25 tracks on the Slip In and Out of Phenomenon retrospective, the early 1980's New York band Liquid Liquid is proving to be quite the important discovery.  Hearing them for the first time this month instantly got my mind working.  I was ready for it.

Here are some early takeaways:

Liquid Liquid's music is rhythm-based and percussion driven.  There is no guitar.  No horns.  Yet somehow still melodic despite having no main melody instrument.

It sounds alien, like a transmission from another world they have not told us of.  Is this the music the Jivaroan tribe would play before shrinking heads?

This is primal, primitive, outsider art.  Urban field recordings.  The musicians aren't even musicians.  They are experimental, minimalist sound artists - throwing beats and yelps at a canvas to see what sticks.

Only amateurs could make music this devoid of intent.

The vocals aren't even vocals.  They are chants, shrieks and undecipherable words.  What the hell is a marimba doing in there and why does it sound so good?

Email ThisBlogThis!Share to TwitterShare to FacebookShare to Pinterest
Be a Fan
Posted by Tanner Llewellyn at 5:44 PM