New York City Redo: Just Give Me Something I'm Used To

The getting there might have been different (a 7-hour overnight bus ride last year, a 51 minute flight this year) but the arrival was the same: Greenwich Village, 10:00 on a Saturday morning.  First stop - Caffe Reggio.  Same table as last year.  Same waitress as last year.  She's probably there every day.  Same Classical music playing over speakers.  Exact same furniture, decor, artwork, table setup. Same amount of people in cafe. Same type of people.  I'm probably sitting in the exact same chair.
Noontime.  Entering White Horse Tavern, just like last year.  Is that the same two old-timers sitting at the right of the bar?  They have the same two bottled beers as before, and that one guy is looking at a newspaper again.  Today's newspaper. 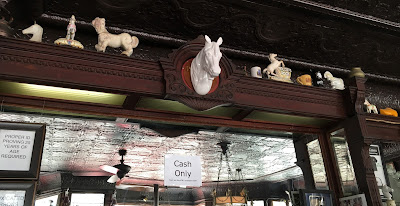 That's definitely the exact same bartender.  And yep I'm sitting the same stool at the bar.  Hey there's Dylan Thomas!  Was that cane there last year?  Yep.  It's been there so long no one can remember why.  Guinness still on draft, thank goodness.  "It's getting more popular" says Bob.  More popular than last year(?), I wonder.  Why do large groups of talky goofballs walk in this place, stay for a few minutes and then leave?  So Groundhog Day. 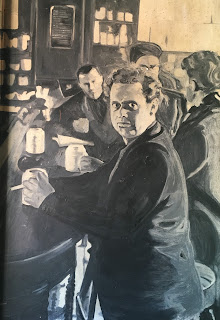 What's the occasion?  Bill Frisell at the Village Vanguard.  Same reason as last time.  Now it's 8pm.  Well at least the Vanguard hasn't changed that much.  There might have been a new poster on the wall.
New York City is an organic, constantly shifting organism.  You can't make it bend to your will or even expect it meet expectations.  But somehow for a little while there March 2017 could have doubled for March 2018.

Email ThisBlogThis!Share to TwitterShare to FacebookShare to Pinterest
Be a Fan
Posted by Tanner Llewellyn at 12:56 PM