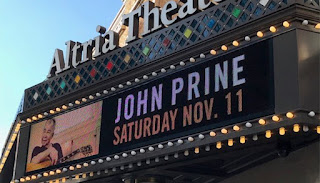 Actually, every John Prine concert review should be just about the same.  Fully invested audience members are going to be taken on a 90+ minute emotional journey that includes laughter, tears, love and sorrow.  That was the case with the show I saw on 11/11/17 at the Altria Theater in Richmond, VA and it was also the case with the last concert I saw him do about 10 years ago, and yes it was pretty much exactly the same when I first saw him live during the summer of '95.

In all these years the setlist and arrangements haven't changed that much.  A few new songs have trickled in over time, equally as brilliant as the ones before, while a few of the old standards have been left behind.  It doesn't matter.  John Prine is really, really good at writing John Prine songs.

I've been wanting to say something about this most recent concert ever since it happened, but I really can't find the words.  "Nostalgia" isn't exactly what I'm looking for.  Prine's songs have always been loaded with nostalgia, even on his first album when they were new songs.  So it is nostalgia, but it's also not nostalgia.  There was something incredibly enriching and cathartic at this point in time to be completely engrossed in the concert experience.  It felt like a time-jump that could have been any decade among Prine's performing career, and/or a quantum leap to any point along my concert-going life up 'til now.  Time went out the window.

This audience was right there, with him one-hundred percent, just like I remember in Roanoke many years prior.  The energy in the Altria Theater was tingling, same as it ever was.  Prine's genius and delivery perhaps even more apparent than ever before.  His songs are so simple and yet so genuine, the lyrics embedded deeply into the minds of anyone who has ever taken the time to enjoy his music.  Every word hit home and every note rang true on several levels.  I was entertained, to say the least.  Maybe that's part of the nostalgia as well?


Email ThisBlogThis!Share to TwitterShare to FacebookShare to Pinterest
Be a Fan
Posted by Tanner Llewellyn at 12:34 PM