My music nerd intuition told me that the news I learned of last Friday that the entire ECM Records catalog was now available on streaming services such as Spotify was a big deal. The knowledge registered as important - I had a sense that ECM was "cool" - but I honestly didn't know much at all about the German label until the last few days. Previously, I was probably only familiar with ECM because I knew it was the company for which Bill Frisell made some of his first recordings.

I hadn't really even thought about the fact that ECM wasn't streaming before, but past unsuccessful searches for some Pat Metheny and Vijay Iyer records make more sense now. 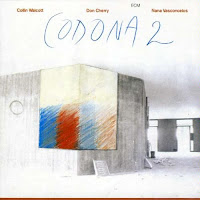 Over this past weekend I did some research into the ECM catalog and jumped in with open ears ready for discovery. One thing that quickly became apparent is that the music on ECM isn’t quite what I expected, because I wasn’t expecting it to be so “new agey” and “fusiony”, or maybe so minimalist and atmospheric. I’ve only scratched the surface, checking out about 2.5% of the more than 1,600 ECM titles, but so far it’s more Windham Hill than Tzadik; more Kenny G than Coltrane. That perspective will change I'm sure as I hone in on specific areas of interest.

One of the first albums I listened to was A Cosmic Rhythm With Each Stroke by Vijay Iyer and Wadada Leo Smith because I had already been hoping to hear that one and it turns out that it is on ECM. Bill Frisell's new double album with Thomas Morgan called Small Town is among the many now streaming. I already own a copy of Small Town on vinyl. It's superb! And of course, my life-long neglect of Pat Metheny's Bright Size Life came to a satisfactory end. That one is a headphones jam for the Jaco effect. 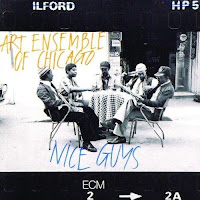 Some other things have had my initial attention. A band called Codona featuring Don Cherry is definitely worth a listen. They offer a global music take on free jazz - bird sounds and sitar. Bassist Dave Holland has made a lot of recordings for ECM. His album Conference of the Birds under the name the David Holland Quartet is the first one of his I've been listening to. It features Anthony Braxton in a surprisingly melodic mood. Charles Lloyd is another ECM guy - at the least the latter half of his career. I don't know where to begin there...maybe The Water is Wide. Come to think of it, Charles Lloyd might be a pretty good example of the ECM sound.

This interest in ECM also offered an opportunity to finally listen to the legendary experimental group Art Ensemble of Chicago. I've run through Urban Bushmen and Nice Guys so far. You definitely have to be in the mood for this and already be accustomed to avant-garde music to appreciate, but I really liked Nice Guys on the second listen. It was too much the first time though.

I should have known about him already, but I learned of guitarist John Abercrombie through this ECM discovery. I can't say that I love his stuff so far, but there's a certain wah-wah funkiness to Gateway that's appealing; similar in some ways to the Jerry Garcia/Howard Wales album Hooteroll from that same time period. Oh yeah...it's not on ECM, but becoming aware of Abercrombie led to an early band he was in called Stark Reality that I really like so far! Stark Reality reminds me of a zonked-out take on Zappa style music. 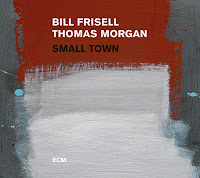 There are some mainstays of ECM Records - people like Norwegian saxophonist Jan Garbarek and Tunisian oud player Anouar Brahem. The early Jan Garbarek stuff, like Afric Pepperbird, has a hip, driving sound. Garbarek's more recent recordings run dangerously close to Kenny G-land, but his keen sense of melody - often from a folk perspective - keeps even these New Age works interesting. In the case of Brahem, it is fascinating to hear his oud in a jazz context but I need more time to develop a better opinion on this type of world fusion music. At times it can sound like a hodge podge.

Other names on the ECM "to do" list include Chick Corea, Eberhard Weber, Paul Motian, Arvo Pärt and Steve Reich.

Jazz and experimental music is pretty male dominated, but I was reading how ECM is known for featuring female artists. Carla Bley, Meredith Monk and Agnes Buenas Garnas are names that have come up.

I'm glad that ECM has put this music out there, allowing it to be heard by a wider audience. Obtaining vinyl copies of favorite standouts is the next logical step.

Email ThisBlogThis!Share to TwitterShare to FacebookShare to Pinterest
Be a Fan
Posted by Tanner Llewellyn at 11:35 AM