At one point in his life Phil Lesh was an adventurous musician.  He's often described as being some type of weird, mid-20th Century avant-garde composer prior to becoming a founding member of the Grateful Dead.  Then there's that whole head-scratching Seastones thing with Neg Lagin in the 1970's - quadraphonic electronic music.

There's no question that Phil Lesh is/was one of the most influential bassists of the rock era, and perhaps even the best electric bass improviser thus far (looking at you Jaco).  Phil's distinctive low end was certainly an integral part of the Grateful Dead's synergy and drive.  Unfortunately, there aren't many examples of him playing music outside of the Grateful Dead canon.  If there were, I'm guessing that Phil's brilliance would be even more apparent. 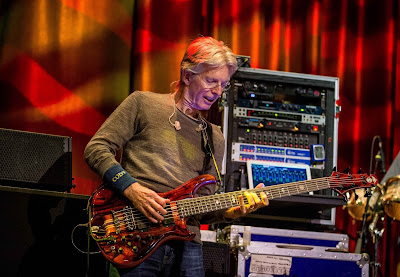 For sure, the Grateful Dead took up the majority of his time for the 30 years that they were a touring band.  Difficulties with alcohol during parts of that stretch might have also cut back on Phil's output.  But, in the post-Jerry days since 1995 you'd think that a clean-living Phil might have found some other outlets for his creativity.

The fact that Phil never branched out to work with artists outside of the jamband community, and/or never really pursued an original, compositional path post-Grateful Dead is a major loss for the music world.  Just imagine if Phil had revisited his interest in the avant-garde by doing an album of free jazz with the late Ornette Coleman - an artist who remained vital right up until his 2015 passing. Or what if Phil had indulged his composer persona by writing music for one of the many impressive "new" music ensembles around today, such as eighth blackbird.

I recall a Phil and Friends show with guitarist Bill Frisell and drummer Billy Martin, but instead of it being an all improv trio set of those two guys + Phil playing all new music, it turned into just another Phil and Friends show where the skills of Frisell and Martin were not really utilized or called for, and we still didn't get to hear Phil in a more experimental context.

Bill Frisell just released a beautiful duo album with bassist Thomas Morgan recorded live at the Village Vanguard (called Small Town).  Thomas Morgan sounds fantastic on it, but just imagine for a moment if it were essentially the same material but with Phil Lesh filling the role of bassist.  It definitely would have modified the vibe to have Phil in that historic room due to the expectations of the crowds it would have drawn, but I would love to have a recording like this.

Last night I tuned in to a few minutes of the LOCKN webcast.  After waiting for that awful Warren Haynes set to finish 30 minutes past its allotted time, I watched a couple songs of the Phil/Bobby Terrapin Station set.  If performing an entire album you recorded in the late 70's song-for-song isn't nostalgia, then I don't know what is.  What I saw was not a good performance or interpretation of the music.  The only guiding light was that - amidst all the missed cues, flubbed lyrics, lack of direction, confusion and other sorts of Bobby-related failure - there was Phil's pristine bass guitar, sounding just as incredible as always, if not more.

It was bittersweet to hear this man in this context, on stage part of a group that is trying (and failing) to make something interesting when it is not.  And yet, with every note he played, Phil conveyed an artistry that belied its surroundings.  Too bad we'll never get to hear that side of Phil to its fullest extent.

Email ThisBlogThis!Share to TwitterShare to FacebookShare to Pinterest
Be a Fan
Posted by Tanner Llewellyn at 10:49 AM