Until this past weekend I didn’t know there was a published book of Bill Frisell compositions but there is! It’s called Bill Frisell: An Anthology. If I had known about this book prior to now I would have bought it years ago. Soon I will have a copy though.

An Anthology was first published in 2001 so it only includes Frisell's work up through that year’s Blues Dream album, but it still contains over 80 pieces dating all the way back to Throughout from 1983’s In Line. Other tunes include Amarillo Barbados, Lookout for Hope, Rag, Strange Meeting, Egg Radio, Verona, Monroe, Poem for Eva and Ron Carter. The full contents are below.

In the preface Frisell says “I’d rather not try to explain too much about how any of this music might be approached, but let the notes speak for themselves. When I’ve played these pieces over the years with my various groups, they’ve been a jumping off place – hopefully with something new happening each time. There’s no real set way to approach them. I hope that anyone else playing them will try to find her own way – changing the tempo, orchestration, whatever. They’re not really meant to be played just like the record. I hope the music in this book will be of interest not only to guitar players. Some of it was written with guitar in mind, but much of it is presented like a score and could be arranged in any number of ways, for any instrument(s).”

On writing, Frisell says, “I’m not a fisherman, but writing for me is something like what I imagine fishing to be. There’s this huge ocean of music surrounding us, moving by us all the time, and if we’re patient, quiet, and sit there long enough, a melody will come along”.
Recently I’ve been trying to play along with some of Frisell’s more approachable single-line melodies, such as We All Love Neil Young/Song for Lana Weeks from Big Sur and Farmer/I Am Not A Farmer/Small Town from Disfarmer. Hopefully we are due for An Anthology Volume 2 because arguably Bill’s best work has come in the 15 years since this initial collection was published. 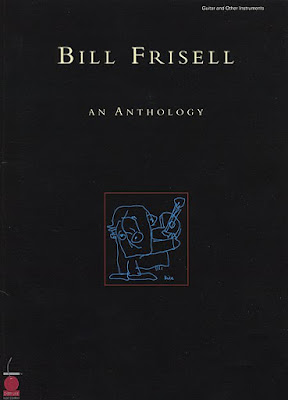 Email ThisBlogThis!Share to TwitterShare to FacebookShare to Pinterest
Be a Fan
Posted by Tanner Llewellyn at 5:50 PM