Five Favorite Instruments of Mine (That Aren't Tenor Banjo)

I play music for fun as a hobby. The instrument I use to do so is the 4-string tenor banjo. In my case I tune it GDAE (low to high) which is one octave lower than a mandolin/violin. The tenor banjo allows me to pluck instrumental melodies to songs or tunes, similar to what someone is doing when they are whistling. Each evening around the house, during the same free time that someone else might choose to watch TV or play Pokemon, I play my musical instrument of choice: the tenor banjo. 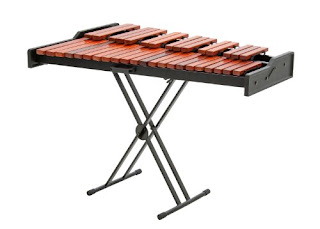 Marimba
The marimba is a tuned percussion instrument with wooden bars laid out in a similar way to a piano keyboard. The wooden bars are struck with mallets to produce musical tones. Resonators suspended underneath the bars amplify their sound. The marimba was developed in Central America and is the national instrument of Guatemala. It is like a xylophone although it is pitched an octave lower and produces a richer sound.

Why I Haven't Played the Marimba Yet: Cost, size and playing style. I haven't done a whole lot of research but beginner/student level marimbas seem to start at over $1,000. That's a pretty steep investment. Also, marimbas are pretty big and would take up a lot of room in the house. I don't really have the space for one. My last excuse is that the proper playing style involves holding more than one mallet in each hand and I don't really see myself wanting to do that. I'd probably just want to hold one mallet per hand and try to bang out single-line melodies. I might still get one in the next year or two. 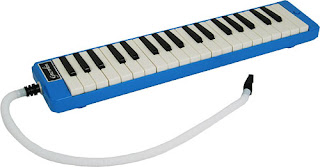 Melodica
The melodica is a free-reed instrument similar to the pump organ and harmonica. It has a musical keyboard on top and is played by blowing air through a mouthpiece that fits into a hole in the side of the instrument. Pressing a key opens a hole, allowing air to flow through a reed. It produces sound only exhaling into not inhaling. Melodicas have a rectangular shape and they are held with one hand (a handle is located underneath most of the instruments) while the keyboard is played with the other hand. The keyboard is usually two or three octaves long. Melodicas are small, light, and portable, and inexpensive. The modern form of the instrument was invented by Hohner in the 1950s.

Why I Haven't Played Melodica Yet: This is simple...spit! Although I like the sound of a melodica I don't want to play any instrument that you have to use your mouth to play because the idea that moisture gathers into the instrument is just unappealing to me. This probably also rules out another favorite of mine, the clarinet.

Appalachian Dulcimer
The Appalachian dulcimer (or mountain dulcimer) is a member of the zither family. The dulcimer has a drone similar to the bagpipe, reminiscent of the early settlers of the Appalachians whose music helped shaped the beginnings of bluegrass and early country music. The hourglass shaped body extends the length of the fingerboard and its fretting is generally diatonic. It was originally used as an instrument to accompany ballad singing. Traditional players use a wooden noter, or dowel, to fret single melody notes, while others prefer the more modern approach of chording as both accompaniment and lead. It is unrelated to the hammered dulcimer.

Why I Haven't Played Dulcimer Yet: Tuning limitations. Due to the diatonic fret pattern and various tunings the dulcimer isn't versatile enough to cover every possible melody or scale. From what I understand the most common tuning facilitates playing in the Ionian mode, and then you have to re-tune and/or use a capo to play in other modes. I don't want to play any instrument that you have to re-tune for certain keys, etc. 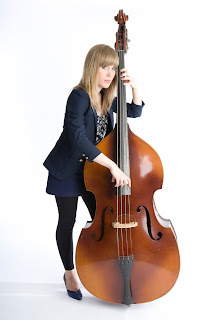 The Upright Bass (AKA "Double Bass")
The acoustic upright bass is the largest and lowest-pitched instrument in the violin (or viol?) family, but it is tuned in 4ths rather than 5ths like the violin, viola and cello. The bass is used in a range of genres, such as classical, jazz, rock, blues, tango, bluegrass. You're probably familiar with it already so I don't need to go into much detail. When I think of upright bass players I think of people like Charles Mingus, Chris Wood, Mark Schatz and Stephan Crump.

Why I Haven't Played Upright Bass Yet: Well, they take up a lot of room and I suspect that they are expensive. But the main reason is that the bass is an accompaniment instrument and I simply like playing lead melodies. I would like to perhaps get a bass some day to learn more about harmony and chord theory, but I probably wouldn't choose an upright bass simply because of its size. I would probably go with a shorter scaled electric bass just to learn the concept of bass playing. 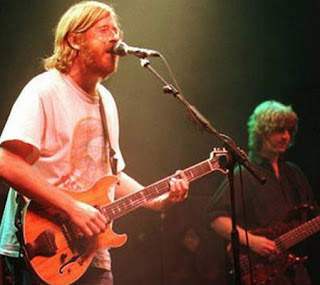 The Electric Guitar
Do I even need to describe the electric guitar? We all know what it is. It's a guitar that uses a magnetic pickup to convert the vibration of the plucked strings into electrical impulses that can be heard when the guitar is plugged into an amplifier. The electric guitar was invented invented in the early 1930s and quickly adopted by jazz guitarists who sought to be able to be heard in big band ensembles. During the 1950s and 1960s, the electric guitar became the most important instrument in pop music, serving as a major component in the development of electric blues, rock and more. I was going to make the last instrument on this list the accordion, but most of my favorite musicians are electric guitar players (Jerry Garcia, Trey Anastasio, Bill Frisell, Mary Halvorson, Dean Ween, Derek Bailey) so it would be disingenuous not to include electric guitar in the top five.

Why I Have't Played Electric Guitar Yet: I dunno, too common? (I actually did have a left-handed electric guitar once). The guitar checks all the boxes in terms of versatility and repertoire but for some reason I'm not drawn to it as an instrument I want to play for my own enjoyment. Any melody I can whistle can be played on the guitar in any key. However, I can also do that same thing on my chosen instrument, the tenor banjo, and still feel like I'm doing something fairly original (AKA self-indulgent). There are just too many awesome guitar players. I would feel like a poser if trying to play it. The bar has been set too high. If you played guitar there would be constant reminders of how you're not ever going to be as good as Hendrix or Zappa or Jerry. Whereas with tenor banjo I can play whatever I want on it and feel like I'm the only person in the world doing it. I've never once questioned the decision to play tenor banjo even though I'm always wondering what to play on it.


Email ThisBlogThis!Share to TwitterShare to FacebookShare to Pinterest
Be a Fan
Posted by Tanner Llewellyn at 12:25 AM