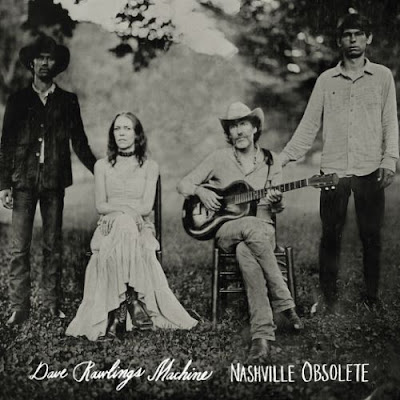 That's four stars out of four, baby. When I clicked play for the first time on Dave Rawlings' new Nashville Obsolete album and instantly started singing along with The Weekend - a song I had never heard before - I knew it was a good sign.  When the first signature Dave Rawlings guitar solo hits at about two-and-a-half minutes in I was reminded once again of just how great of a guitar player Mr. Rawlings is.  He's plucking an acoustic guitar with no other effects, so essentially it's flatpicking but with a more outside bent, like a Norman Blake being pulled in the direction of Derek Bailey.  His second solo a couple minutes later is more direct and to the heart.

We're still in the first song at this point, mind you.  There are only 7 songs on Nashville Obsolete, so each one is important.  A self-aware sleight of hand allows the 2nd song to begin with the words "I met her on a harvest moon".  Emphasis on the words "Harvest Moon".  The strings on these first two tracks are hanging out, watching from afar, as if the songs are the movie and they are responding to scenes on a screen, eventually joining forces and merging together.

Don't pay too much heed to the title of the album.  It doesn't mean what it means.  This album is trippy that way.  And not just because the next song is called The Trip.  This song should fail with its thrown together words and loping pace, but it's too big to fail.  It's too damn classic and perfect.  I love it when Gillian's voice briefly overtakes Dave's at points.  It's much too much to try and live a lie at home.  The harmonica is blown baby, throw it away.  Your denim shirt ragged and your dirty collar's frayed.  I tried to play my horn for ya', but I couldn't seem to find a note.  So I picked up pen and paper and this is what I wrote.
We're three songs in and half-way through.  That Bodysnatchers riff...any resemblance to the Grateful Dead's Unbroken Chain?  The songwriting being used here is quite far down the river; more elevated, nuanced, poetic, veiled, provocative and intoxicating than what is usually required of this type of music, assuming that this is a type of music.  The only type that it really is is natural music.  The kind that pours out of you.  The fifth song The Last Pharoah follows the most conventional structure of any so far, which is totally cool actually, sounding like something that could have been on a Taj Mahal record.  One wonders where an artist like Mr. Dave Rawlings gets his inspiration to write songs like this?  How do you even come up with these words?

Your reaction to the song Candy will pretty much determine your overall appreciation of this album.  If you receive it well, you're likely going to sway in the four star direction where I'm leaning.  If you find it to be novelty or throwaway, then chances are it could tarnish the overall flow.  Candy is 14% of the album!  If this song sucks then the album is only at 86% at best.  That's only like 3.44 stars out of 4.  But candy doesn't suck.  Candy comes along at just the right time.

I won't get drunk no more more.  It doesn't rhyme, does it?  Hopefully you've been singing along the whole time, but especially here.  Pilgrim, you can't go home.  If Nashville Obsolete really is the first Dave Rawlings Machine album, as Dave and Gill like to say, then it's quite a debut.  It feels unresolved.

Email ThisBlogThis!Share to TwitterShare to FacebookShare to Pinterest
Be a Fan
Posted by Tanner Llewellyn at 9:24 AM