If you give a British person or a Southern (USA) person a sentence to read, chances are that he or she would read it with a British or Southern accent, respectively, even if he or she had never said those exact words before.  Along those lines, it's not too much of a stretch to also say that an Irish tenor banjo player (someone who plays Irish traditional music on the 4-string tenor banjo) can and should have an Irish musical accent, regardless of the tune he is playing.

So, last week I made myself a "listening tape" containing two or three sets of tunes from CDs by Irish tenor banjo players Angelina Carberry, John Carty, Kevin Griffin, Daithí Kearney and Kieran Hanrahan.  I tried to find tracks that featured the banjo as the lead instrument prominently in the mix, ideally with just a sparse amount of backup.  I wasn't necessarily basing it on common vs. obscure tunes. 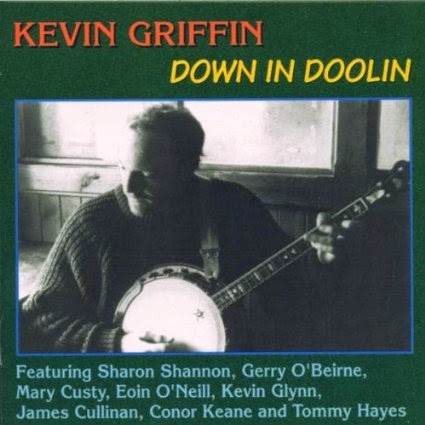 I also slowed down the recordings to 75% speed (good or bad idea?) to help hear the subtleties of the triplets and other ornamentation that these players were doing.  In the case of the John Carty CD "I Will If I Can", the tunes were all a half-step sharp so I lowered the pitch by a semitone so that Jim Ward's jig was in the key of G instead of being tuned up to G#, for example.

The idea here is to not necessarily learn these specific tunes, but to get a better intuitive sense for the native sound of this music as a whole so that it can come through in anything that I play. It's similar to a voice over artist learning a new accent.  Presumably after gaining a familiarity with that accent the voice over person could make assumptions about how unfamiliar words or phrases would be voiced in that accent.

Email ThisBlogThis!Share to TwitterShare to FacebookShare to Pinterest
Be a Fan
Posted by Tanner Llewellyn at 10:34 PM