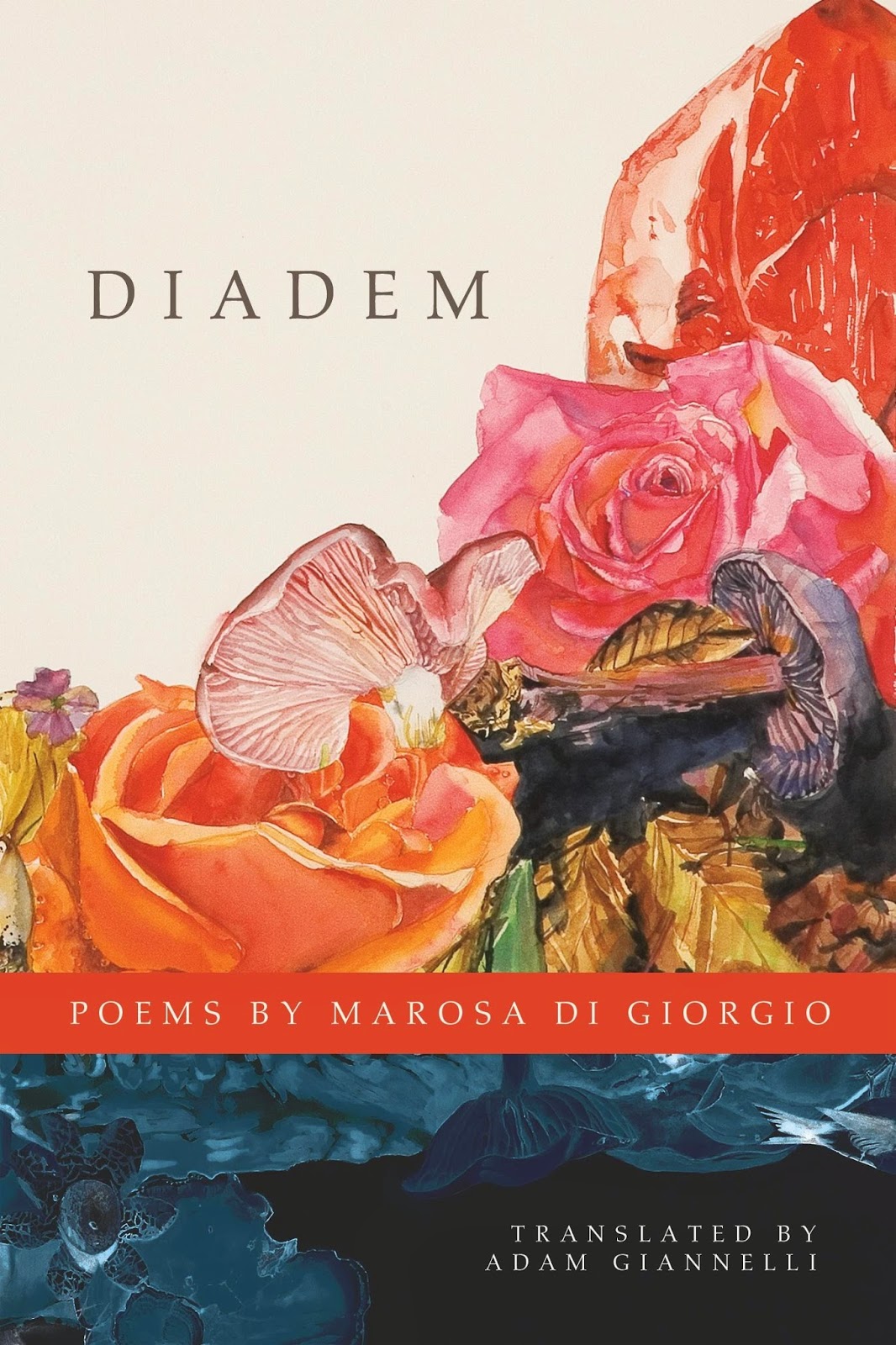 The poets that I like tend to write short – 50 to 200 word – pieces that really don't follow any rules (except for that abbreviated word count).  Russell Edson’s prose poems and Nate Denver’s word stories are good examples of this.  I might even put the entries in Judith Schalansky’s Atlas of Remote Islands in this category.

My most recent find is Marosa di Giorgio, a Uruguayan poet who lived from 1932 to 2004.  Her first collection of poems was published in 1953; the first of 14 books that came out during her lifetime. Her poems always take place in the same fantastical universe, in seemingly the same place and time: the gardens and pathways surrounding her childhood family home in a rural area outside the city of Salto, Uruguay.

Writing from the perspective of herself as a little girl, this world is inhabited by friends, relatives, butterflies, flowers, mushrooms, ghosts, devils and angels.  In Marosa di Giorgio's poetry there's no distinction between fact and fiction, between memory and imagination.

She wrote in Spanish, but in Diadem: Selected Poems, published by BOA Editions, a portion of her poems have been translated to English by Adam Giannelli.  Each of these poems fits easily on one page, so they have included the original Spanish language version on the left page and Giannelli's English translation on the right.  Having it be bilingual is great because once I finish reading through the poems I plan on slowly going back through them to compare the Spanish to the English.

Here's an excerpt from Diadem.


I remember my wedding, which took place far away, at the white dawn of time.
My mother and sisters were walking through the halls.  And the old bats - who witnessed my parents' vows - emerged, incredulous, from the spider webs to smoke their pipes.
All day smoke rose from the house; but no one came; it wasn't until dusk that little critters and incredible relatives started to arrive, from the furthest farms, many of whom we only knew by name, but who had heard the signal; some were covered head to foot with hair, they didn't need to wear clothes, and walked here and there on all fours. They brought baskets of colorful mushrooms: green, red, gold, silver, bright yellow, some raw; others, lightly roasted or sweetened.
The ceremony dictated that all the women put on veils - only their eyes were visible and they all looked alike - and that I walk before them naked, there beneath those strange glances.
Then, over our heads, our plates, they began to pass sizzling steaks and intoxicating wine. But, underground, the drum band, the blindmoles, kept beating faintly.
At midnight I went to the master bedroom.
Before climbing into the carriage, I put on the shawl that married women wear. The relatives muttered in their sleep. Since there wasn't a groom, I kissed myself, my own hands.
And headed south. 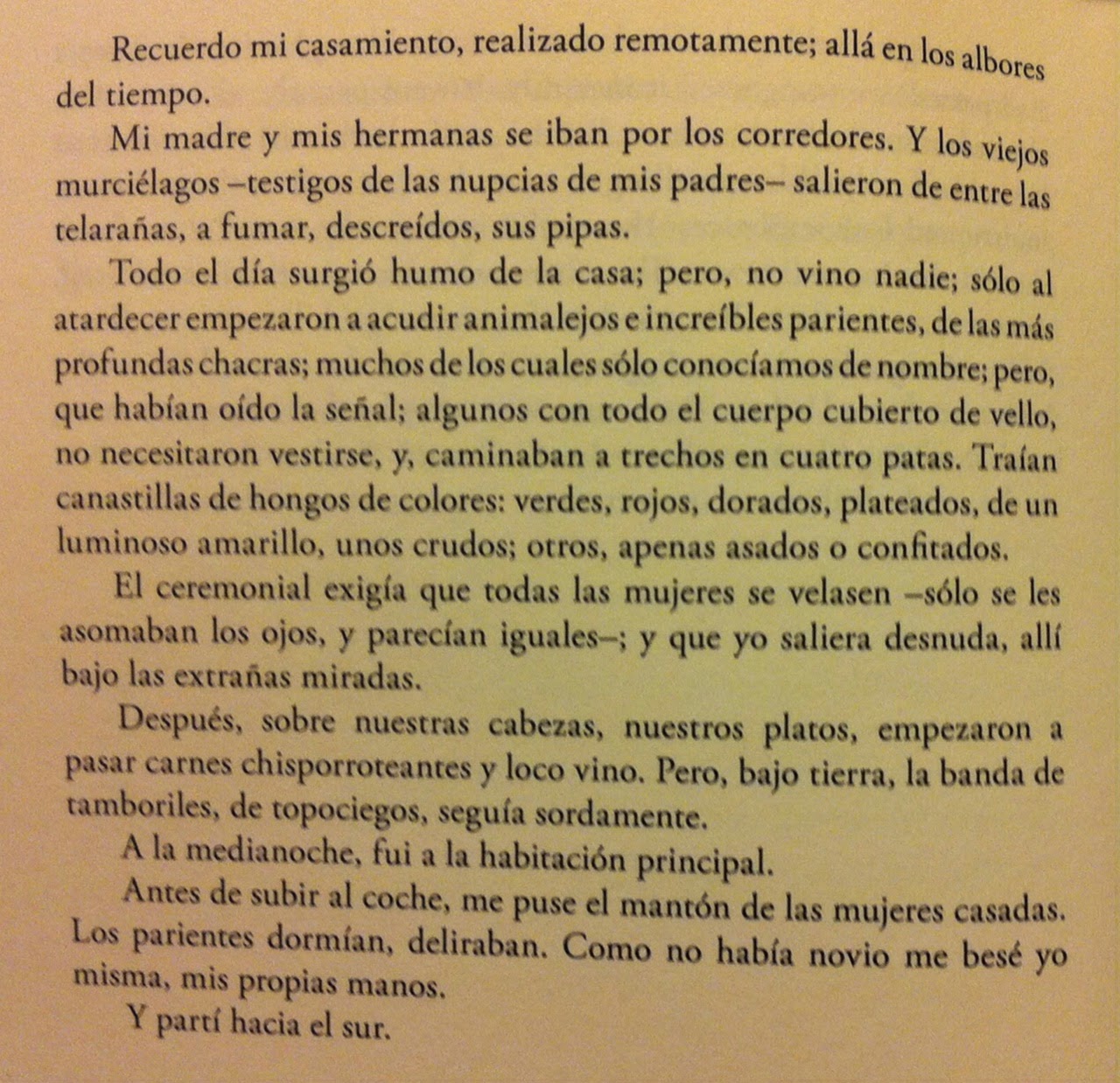 Spanish language version of the same poem above.
Email ThisBlogThis!Share to TwitterShare to FacebookShare to Pinterest
Be a Fan
Posted by Tanner Llewellyn at 5:12 PM