The Red Line Acoustics brand Traveler mandolins are made just outside Nashville, TN by Steve Smith of Cumberland Acoustics and his small shop team.  The mandolins are modeled after the old World War I Army-Navy "pancake" style mandolins, with a flat-top and rounded body.  Steve has upgraded this classic design by adding a truss rod, radiused fretboard, different bracing and his trademark Cumberland Acoustics bridge.


Mandolin and Tenor Guitar Sound Sample - Over the Waterfall

These oval hole Red Line mandos are symmetrical.  Steve had a couple unclaimed ones in the build process, so he took the one I chose and finished it up as a lefty.  It took about 2 months total from the time I first contacted him until I was holding the instrument in my hands!

The Traveler has a good amount of volume and what I would call a "sweet" tone, probably due to the mix of mahogany and spruce.  I haven't had any setup done at all and can't really tell that it needs any.  Eventually I might have someone give it a once over, but it was very playable right out of the case it was mailed in!

As I now listen to these recordings made this past Thursday, a little over 3 weeks after receiving it, I am very impressed at the sound I am hearing (not only does the mandolin sound good, but as someone who took up mandolin in January of this year the person playing it doesn't sound too bad either! I had played tenor banjo for a few years prior which certainly helps with mandolin.)  For a hand made mandolin in the less than $700 price range, you can't beat the Red Line Traveler.

Blueridge BR-40T Tenor Guitar
My wife Laura has been backing me on tunes using a baritone ukulele tuned DGBE, like the 4 highest strings of a guitar.  She uses a pick to play and this works great for around the house, but when she takes it to an oldtime jam it's easy for the baritone uke to get drowned out by the fiddles and banjos.  And forget about taking it to most Irish sessions - the baritone uke is still a bit too foreign to be openly accepted in that environment.


Mandolin and Tenor Guitar Sound Sample - The Boys of Tandernagee

So, Laura wanted an instrument with more of a guitar-like tone that she could still play the same as the baritone uke she was used to - same chord shapes, strumming, 4-strings, et cetera.  A tenor guitar strung up DGBE was the obvious choice.  "Tenor guitar" may be a bit more accepted in trad music circles because noted Irish players like John Carty, Brian McGrath and Eamon Coyne have used a tenor guitar on some recordings, not to mention its history as a backup instrument in Texas style fiddling. 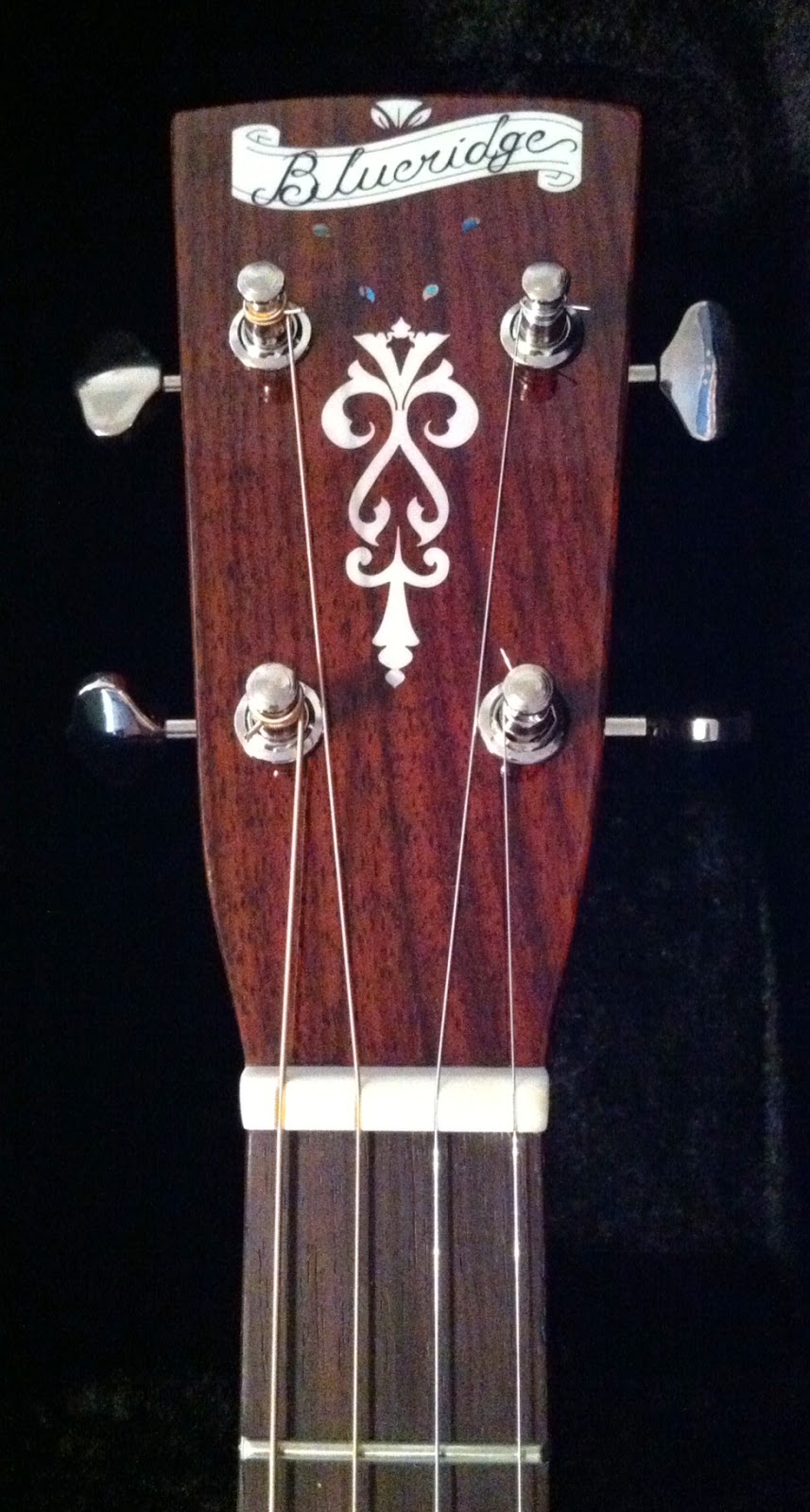 The Blueridge BR-40T kind of has a corner on the market of tenor guitars.  There's the Gold Tone model, but it gets poor reviews, and then there's the Ashbury line - out of the UK but made in Vietnam - which has some good feedback but there isn't as much information on.  The BR-40T stood out as the best choice.

The BR-40T is pretty much a copy of the classic Martin 0-18T tenor guitar.  It has a 13.5" lower bout, a 10" upper bout, is 3 7/8" deep, has a nut width just over 1.25", has a 23" scale and is 35.25" inches in overall length.  It has a solid spruce top and a laminated mahogany back and sides.  The neck joins the body at the 14th fret.  The neck has more of a rounded tenor banjo shape to it than a typical guitar neck.  The vintage style tuners seem to hold.  There's an adjustable truss rod and a radiused fretboard.

For an instrument made in China, the Blueridge is very well made and playable.  Laura had it checked over by John Gonzalez of Fan Guitar and Ukulele the day after it arrived in the mail and he only had to do some minor adjustments.  It comes strung up with strings for CGDA tuning, but John set it up for DGBE tuning with D'Addario Phosphor Bronze EJ26 strings.  There were a couple cosmetic blemishes, probably from when they were filing down the frets in the factory - common on instruments from Asia - but John was able to lightly sand those down so it's not noticeable.

Laura says the size of the tenor guitar makes it very comfortable for a woman or a person with smaller arms or hands.  It's definitely louder than a baritone uke with more sustain and achieves that guitar-like tone she was looking for with better than expected results.  The sound samples featured here were recorded on her first day of playing it after it had been setup, so the sound could open up even more once it's broken in.

In summary, the addition of a mandolin to my tenor banjo as well as the addition of tenor guitar to Laura's baritone uke gives us a wider combination of sounds to choose from when picking and strumming tunes.


Email ThisBlogThis!Share to TwitterShare to FacebookShare to Pinterest
Be a Fan
Posted by Tanner Llewellyn at 11:40 AM