Medeski, Martin and Wood is a band I have the utmost respect for.  For 20+ years now I've been listening to pretty much everything they have released, as they put it out, and universally digging it.  I trust these guys to know better than I do when it comes to determining what music needs to be made.  So, when my copy of Woodstock Sessions Vol. 2 featuring guitarist Nels Cline arrived in the mail earlier this week I put it on that evening.  At the time it didn't jive with what I was in need of and I cut it off about 20 minutes in.  Noise.

But last night I gave Woodstock Sessions another shot, while returning home on a late Saturday evening hour-long drive along country roads, when there was no rush to be anywhere and all one has to be concerned with is stray deer - which there were plenty of.  The album worked much better as the soundtrack to such an endeavor.  What was once noise now became sublime. 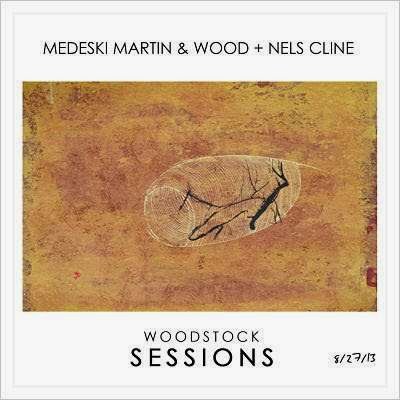 Woodstock Sessions Vol. 2 (where's Vol. 1?) was recorded live on August 27, 2013 at Applehead Studios in Woodstock, NY in front of an intimate audience, but it is edited in such a way so that you don't really hear it as a "live album".  Medeski, Martin and Wood are joined by consumate guitarist Nels Cline of Wilco fame, and this addition inspires sort of a bizzarro version of Medeski, Martin, Scofield and Wood.

I've only listened to the album that one time not 12 hours ago, but I interpreted it as four engaged soloists with a deep-seated understanding of music allowing their collective abilities to arrive in any territories "the now" deemed pertinent.  Medeski, Martin and Wood have a reputation of being groovemeisters, but anyone who has seen them live knows that - while true - they also spend almost as much time channeling shamanic visions that have more to do with anthropology than chord changes.

The addition of Cline takes that a step farther.  The groove is definitely still there, but it's subliminally hiding out under a blanket of sound with little intention of showing its face.  Rather than play to the whims of an audience and go in a direction that might dictate, MMW + Cline shake off those surface level inclinations continually in search of deeper layers.  As a result, your're not really listening to John, Billy, Chris and Nels as individuals, but rather as a greater-good celestial music mind.

That's what it sounded like to me at least.  You be your own judge.  And remember to eat lots of fish; it'll help you with your scales.

Email ThisBlogThis!Share to TwitterShare to FacebookShare to Pinterest
Be a Fan
Posted by Tanner Llewellyn at 10:07 AM