I like checking out instruction books designed for instruments other than the instrument(s) I play to see things from a different perspective and to better grasp the universal nature of music.  It was for those reasons that I ordered some Flatpicking Essentials books from Flatpicking Guitar Magazine.  With those books came a DVD called “TheGuitar Player's Guide to Improvisation – An Approach to Improvisation” which – until a few days ago – had remained unopened. 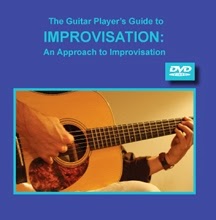 Recently I’ve been getting a hankering to jam out on Jerry Garcia and Gillian Welch songs, so a tutorial addressing the concept of plucking something other than the straight “vocal-line” melody is something I could use.  Prior to watching this DVD my attempts at improvisation felt like flailing in water over my head, never sure where to land.  After watching this DVD just one time through I suddenly had a firmer understanding of how one might approach improvisation.

On the DVD, the talented flat-picker Tim May and Flatpicking Guitar magazine editor Dan Miller teach what they call “fake it until you make it”.  Tim and Dan's belief is that even beginners should be working on improvisation skills and that anyone can improvise a solo, even with no previous experience with improvisation.  As a mandolin/tenor banjo player, I kept waiting for things to come along that were too guitar-oriented, but for the most part the concepts they covered apply to any melody instrument.

Tim and Dan are noticeably cautious when discussing things that could be construed as music theory, out of deference to folks who may be hostile to that philosophy.  They do use some terms such as “targeting the third” so a little theory understanding is needed and expected, but if you pay attention and follow along you shouldn’t have any trouble comprehending everything they are going over.
A lot of instructional DVDs start off overly simple, then jump to overly complicated real quick.  Tim and Dan have a way of keeping things uncomplicated throughout, but never to the point of feeling dumbed down.  The fact that they manage to make an esoteric concept – improvisation – understandable is quite an accomplishment.

Topics discussed include:
The scale notes that best fit over diatonic (of the key) chord progressions.
How to employ those scale tones using techniques such as scale runs, folded scales, harmonized scales, and crosspicking.
How to target chord tones (the root, third and fifth) in your solo as the tune changes from one chord to another.
How to use techniques like phrasing, note articulation, and dynamics to make your improvisation fit the song while sounding interesting, engaging and tasteful.

It’s naïve to think that one DVD will make you a proficient improviser – only hours and hours of focused practice will really achieve this.  But, watching this DVD will certainly help you on your way toward that goal.  At the very least it will allow you to sit in at a jam session and “fake it until you make it”!
Email ThisBlogThis!Share to TwitterShare to FacebookShare to Pinterest
Be a Fan
Posted by Tanner Llewellyn at 6:11 PM