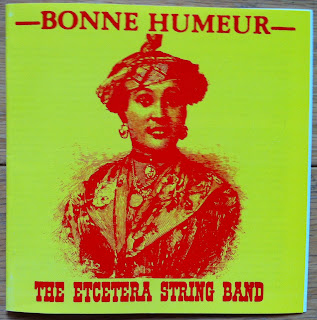 I love discovering a new band, album or style of music that I know is going to become one of my favorites for a long time to come.  Nowadays, I especially also love it if that discovery is something that is going to influence how and what I play on tenor banjo.  A few weeks ago I came across a previously unheard of recording that is one of the best discoveries I've made in years. That recording is Bonne Humeur by The Etcetera String Band. 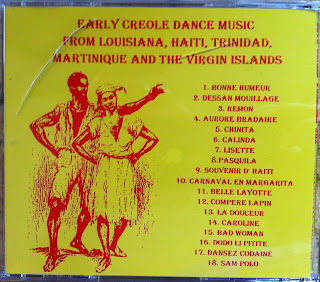 The Etcetera String Band (Kevin Sanders and Dennis Pash, with Bob Ault and Pat Ireland) was a string ragtime ensemble from Kansas City active in the 1970's, 80's and 90's. At some point their banjo-mandolin player Dennis Pash began researching early Caribbean music to see if there would be any similarities between ragtime and the music of other places where there were African slaves.  Meanwhile, guitarist Kevin Sanders had taken an interest in the similarities between ragtime and some types of Cuban and Brazilian music.


This pursuit led them to the string band music of Creole Louisiana, Haiti, Trinidad, Martinique and the Virgin Islands.  Early Caribbean dance music blended European structure and melody with African rhythm and syncopation.  Bonne Humeur is their attempt to provide a sampling of instrumental string band music from various "New World Afro-French traditions": the meringue, beguine, paseo, coonjaille and more.  It is the only recording they made like this and I don't know of any others by anyone else quite like it.


On about half the tracks they had only written sources to work from - such as a basic melody-line from old books and folios like Slave Songs of the United States and Bayou Ballads, adding accompaniment and rhythm based on what they could surmise from recordings of related music. In other cases they worked from compositions by composers in the style such as Arthur Duroseau, Lionel Belasco and Ludovic Lamonthe.  Look those guys up.  Many books and recordings are referenced in Bonne Humeur's extensive liner notes and bibliography, so I have a lot more to learn about this subject.


The album features just Kevin Sanders and Dennis Pash, but they each play a wide variety of instruments to reconstruct the sound they envisioned these early string bands as having: Sanders on guitar, banjo-uke, trumpet and percussion, and Pash on mandolins, 4 and 5 string banjos, banjo-uke, accordion, pennywhistles, mbira, drums and percussion.  What I love about Bonne Humeur is it takes the "island" sound I became fond of through Jamaican Mento and puts it in the format of instrumental AA/BB tunes, which is the kind of music I like to play.


I'm currently working with a music transcriber named Nick DiSebastian to document the Etcetera String Band's arrangements in notation and mandolin tab, so as to more accurately begin playing them on tenor banjo (unfortunately I don't quite have the ear to do this on my own, but thankfully there are folks like Nick who can do this for a reasonable rate).  So far, Nick has transcribed 6 of the tunes and I'm impressed at the accuracy of his transcriptions and at how well these tunes sit on GDAE tuned tenor banjo.  That's probably a result of Dennis Pash being a banjo-mandolinist.  The melodies are no more complex than the Irish and Appalachian music I'm used to, and require less embellishment.


Finding more music of this sort would be great, but I haven't had much luck so far.  Kevin Sanders' new band The Rhythmia does a few of these kinds of tunes on each of their two albums, and I highly recommend those.  To hear more of Dennis Pash, check out his new band The Ragtime Skedaddlers, in which he presents ragtime banjo-mandolin about as good as it can possibly be done.  The videos I've included in this post are tunes from the Bonne Humeur album featuring Etcetera String Band alumni.  I think Bonne Humeur originally came out in 1990, although, sadly, it is now out print. However, you may be able to get a copy of it by contacting Kevin Sanders directly, as I did.

Email ThisBlogThis!Share to TwitterShare to FacebookShare to Pinterest
Be a Fan
Posted by Tanner Llewellyn at 9:08 AM