Deadheads speak in numbers, such as 5/8/77, 10/27/79, 4/19/82, 10/9/89 and so on.  These are the dates of classic and/or particularly memorable shows.  One such date always referred to with reverence is 8/27/72 at the Old Renaissance Faire Grounds in Veneta, Oregon.  This sun-drenched and acid-drenched marathon of a concert is considered to be one their best of all time; very representative of the Dead’s early 70’s country rock meets Bitches Brew sound. 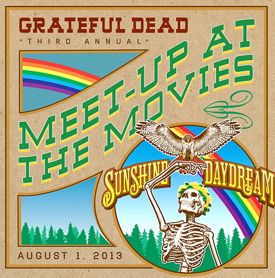 A video bootleg for this show has circulated for decades, shot on 16mm film with no shortage of footage of naked, dancing hippie chicks and other crazy weird happenings, both on stage and off.  Rumors of the film, nicknamed “Sunshine Daydream”, being officially released have been going around for years, to no avail.

Well, the wait is no more because apparently Sunshine Daydream has been restored/remastered and will be shown in movie theaters nation-wide on Thursday, August 1, 2013 as part of the 3rd Annual Grateful Dead Meet-Up at the Movies, always held on Jerry Garcia’s birthday (August 1).

Bonus features include never-before-seen footage from the concert day as well as recently recorded interviews with participants including Ken Babbs, Sam Cutler, Wavy Gravy and Carolyn “Mountain Girl” Garcia.  The film also features appearances by Ken Kesey and the Merry Pranksters.
The concert itself was over three hours long, so I don’t know if they will be showing the whole thing.  The press release I read said it will include the songs “Bird Song,” “Dark Star,” “Greatest Story Ever Told,” “Jack Straw,” “Playing In The Band,” “Promised Land,” “El Paso,” “Sing Me Back Home”, “China Cat Sunflower,” and “I Know You Rider.”  That’s pretty meaty, even if it is just a portion of the music played that day.  The vintage shots of the trippy folks in the crowd will be entertaining as well.

Locally it will be shown at the Cine Bistro at Stony Point Fashion Park and at Regal Virginia Center at Virginia Center Commons.  If outside of Richmond, check local listings for your area.  If it’s anything like last year, part of the fun will be seeing Deadheads taking over the adjacent Texas Roadhouse restaurant for a little pre-game party at the Virginia Center location while regular people there for a Thursday night steak dinner look on in bewilderment.  A good time is bound to be had by all!

Email ThisBlogThis!Share to TwitterShare to FacebookShare to Pinterest
Be a Fan
Posted by Tanner Llewellyn at 12:38 PM