Why do the Tunes All Sound the Same?

The Tunes All Sound The Same
One comment that casual listeners to traditional music often make is that the tunes all sound the same.  There’s a lot of truth to that.  This music was originally intended to be danced to in the days before recorded music.  Dancers required melodies with consistent rhythms and tempos to suit the steps they were making.  Usually this amounted to an 8 measure A part (played twice) and an 8 measure B part (played twice):  an AA/BB format that could be repeated an unlimited number of times.  These similarities in structure can make it difficult to distinguish between the tunes. 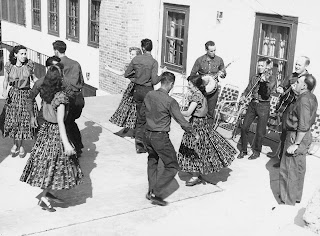 Nope, the Tunes All Sound Different
Anyone who plays this music or really listens to it starts to realize that each tune is different.  The more familiar you get the more unique they become (and/or you learn to see the similarities in a different way).  Those musicians playing for the dancers could have probably gotten by on a handful of tunes, and I’m sure that some of them did.  However, it’s not unusual for an experienced fiddle player to have a repertoire of several hundred tunes – knowing how to specifically play each individual tune, rather than play “at” or “around” them. 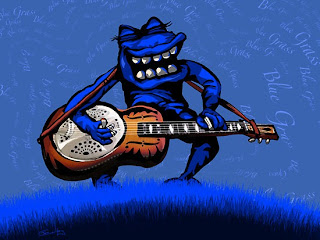 Compare To Bluegrass
Tunes are instrumental.  Songs have lyrics.  A large number of bluegrass songs have essentially the same melody and chord changes, so a bluegrass musician can apply the same licks and solos to a wide variety of songs and have it seem different because of the verse/chorus aspect.  On the contrary, with instrumental tunes you might be playing the exact melody note for note but to the layperson it still sounds the same as all the other tunes because of the lack of singing.  I suppose that’s why the people that love traditional music the most are the ones that play it, while the people who just want to listen and be entertained gravitate toward more performance-oriented forms of music.

Email ThisBlogThis!Share to TwitterShare to FacebookShare to Pinterest
Be a Fan
Posted by Tanner Llewellyn at 7:43 PM