I recently returned from my first ever trip to Jamaica!  Part of my reason for wanting to go to Jamaica was due to a growing interest in the island’s indigenous folk music, particularly mento.

Unlike the traditional music of Appalachia and Ireland that I am also learning, I could find very little if any online sheet music or instruction for Jamaican folk music.  So I turned to any tune books or instruction books I could find.  One that I discovered is called Sing and Play the Jamaican Way by Joy Simons Brown. 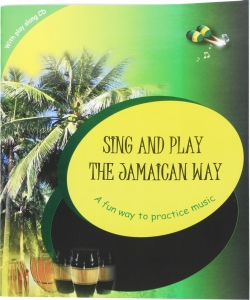 Sing and Play The Jamaican Way is a booklet and play-along CD containing 30 traditional Jamaican folk songs with lyrics and sheet music designed for the intermediate musician.  Each song in the booklet is included on the accompanying CD, performed at a slow tempo by a backing band.  Songs include Dip Dem Bedward, Emmanuel Road, Hol' Im Joe, Linstead Market, Nobody’s Business, Rookumbine, Sly Mongoose and Wheel An Turn Me.
The project’s musical director, pianist and chief arranger is Joy Simons Brown of Sound of Joy Productions in Kingston.  Ms. Brown's goal was to keep this music alive by making it accessible to children and adult learners like myself.  She was joined by musicians Chris Downer (percussion), Cliff Bond (drums), Nicholas Laraque (flute) and Damian Benjamin (bass).
Usually the audio that comes with song books has a lead melody for playing along with, but this CD only had backup music with what sounded like a drum kit and electric bass guitar, and some sprinkling of flute.  It’s well recorded, but seeing as how this is melodic folk music from the aural tradition - where sheet music is typically regarded as only short hand - I found it odd that there wasn’t a lead melody track for ear playing.  Students will either need to already be familiar with these melodies or be pretty good at sight reading in order to play the songs correctly.  It may be that you use this book as an aid to learning a song like Linstead Market, which you may have partially figured out on your own but want confirmation of the melody notes.
Also, instead of the “modern” instrumentation an alternative might have been to use Jamaican folk instruments like 4-string banjo, rhumba box and maracas.  In addition, I would like to have seen the suggested chords listed, but chords were absent from the musical scores.  On the other hand, the steady drum beats and bass on the backing tracks could be of use to a percussionist or bassist looking for rhythmic ideas or for the soloist looking for an alternative to a metronome.
The inclusion of the lyrics gives the reader/singer insight into not just Jamaica’s musical heritage, but also its cultural heritage and folklore.  Each of them a folk tale in miniature, these songs take you back to a time of innocence and youth, whether you grew up in Jamaica or not.  Many lyrics were left in their original patois language, so some may have to do research to fully understand the meaning!  Fans of mento groups like the Jolly Boys and Blue Glaze Mento Band will know that those artists have often taken these child-friendly songs and made them significantly more bawdy by adding their own adult verses.

For anyone with an interest in Jamaican folk music, Sing and Play the Jamaican Way will serve as a nice addition to your practice routine, as it will connect you to many hard to find traditional songs in a fun and entertaining way.  For more information visit soundofjoyonline.com.
Email ThisBlogThis!Share to TwitterShare to FacebookShare to Pinterest
Be a Fan
Posted by Tanner Llewellyn at 10:54 PM