I don't see many movies in the theater any more, but I will be going this Thursday, April 19th at 7pm to see the complete concert video of the Grateful Dead's 7/18/89 performance at Alpine Valley.  It is being shown in select theaters nationwide.  Not to be confused with Downhill From Here from the night before, this footage has never been officially released until now.

I'm not that familiar with 7/18/89, but by all accounts it is a smoking show with a nice opening one-two-three punch of Touch of Grey, Jack Straw, Jack-A-Roe (I always loved the Jack Straw/Jack-A-Roe combo) and an outstanding late 1st set Bird Song.  Although, the real highlight is reputed to be the entire seamless, flawless 2nd set, which starts with Sugar Magnolia, ends with Sunshine Daydream, and includes a few surprises along the way, like an out-of-left-field Scarlet Begonias sans Fire On the Mountain.

In my opinion, 1989 is the year that the band reached its peak and this pro-shot video should be a real treat, representative of that time period.  I would love to see an officially released video from an '82 or '83 show - for good or ill - but I'll take another from the fine year of 1989!  Grab your tickets here. 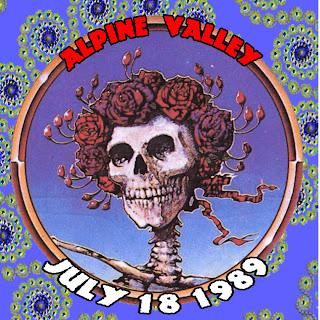 Download/Listen to this Show at Archive.org
Email ThisBlogThis!Share to TwitterShare to FacebookShare to Pinterest
Be a Fan
Posted by Tanner Llewellyn at 12:43 PM