Seeing as how I mostly play tunes sourced from Irish and old time folk music you'd think that if I were going to attend a music camp that either Augusta Heritage, the Swannanoa Gathering, or some other traditional music camp would be at the top of my list.  Or, since I play tenor banjo and have an interest in its varied styles and roles, that I would be considering KlezKamp to study Klezmer tenor banjo technique with instructor Hank Sapoznik, or the Traditional Jazz Band Camp in New Orleans where the tenor banjo class is taught by none other than Carl LeBlanc of Preservation Hall.  Actually the latter two options do seem very interesting, however, the outsider, nonconformist, contrary part of me likes the concept of Camp MMW - a 5-day intensive music program in the Catskill Mountains of upstate New York put on by the esteemed jazz trio Medeski, Martin and Wood. 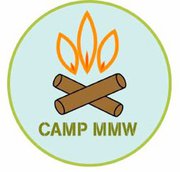 Camp MMW is an unconventional music clinic where - from what I can gather - it's not so much about the instrument you play or adhering to a certain style, but more about the freedom, exploration and expression you can summon from that chosen instrument.  All the reviews and feedback I've read about the camp portray it as an intense, deeply educational, even life changing experience.  I mean, think about it...you have direct access for 5 days to three of the world's most creative and influential musicians!  Of course, in order to really benefit from a workshop such as this you kinda need to have put in countless hours of fundamental practice, which I have yet to really do.  However, knowing that such a camp exists is inspiration for me to plug away until I would be receptive to the teachings Camp MMW has to offer.  While I don't currently include much improvisation in my playing, I hope to eventually steer my musical attention in that vicinity in an effort to reap the benefits that such study affords.
In reality though, I think it's still a little early in my musical development to seriously consider Camp MMW for summer 2012. I would be in way over my head at this point. (The $1,100 camping cost doesn't help). Although a side benefit is attendees get to witness Medeski, Martin and Wood perform nightly after hours concerts in an intimate, casual setting.  That fact alone takes some of the bite out of that tuition cost!  I hear the food's awesome too.
Email ThisBlogThis!Share to TwitterShare to FacebookShare to Pinterest
Be a Fan
Posted by Tanner Llewellyn at 1:04 AM