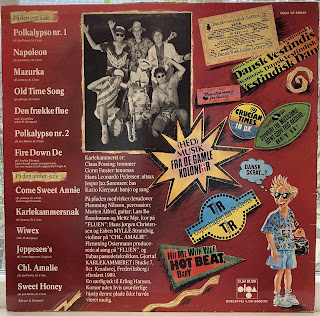 Back in the year 2013 I discovered and obtained a copy of an obscure CD called Bonne Humeur by the Etcetera String Band, a string ragtime ensemble from Kansas City that was active in the 1970's, 80's and 90's. The band featured a surprisingly good banjo-mandolin (banjolin!) player Dennis Pash. Bonne Humeur was a unique one-off recording by the Etcetera String Band because instead of ragtime it focused on the early Caribbean dance music of Haiti, Trinidad, Martinique, the Virgin Islands, and Creole Louisiana. The tunes were played as instrumentals with the lead melody plucked by Dennis Pash on his banjo-mandolin. It was a life changing discovery!

Now, almost ten years later, I have found another group with a similar aesthetic called The Original Danish Polcalypso Orhestra, also known as Karlekammeret. Interestingly, Karlekammeret released their first album of Caribbean inspired traditional music in 1989, right around the time when the Etcetera String Band would have been recording and putting out Bonne Humeur. Something must have been in the air connecting Copenhagen to Kansas City!

The Original Danish Polcalypso Orchestra's approach was a little different, in that they primarily mimicked the instrumentation of St. Croix Quelbe or Scratch bands like Blinky and the Roadmasters or, more importantly, James Brewster's bands such as Jamsie and the Happy Seven or Jamesie and the All-Stars. The Scratch music of U.S. Virgin Islands does often have vocals, it's not all instrumental, but when soloing the head melody lines are usually played instrumentally by a saxophonist. Karlekammeret also had a banjo-mandolin (or maybe banjo-ukulele) but its role was primarily rhythm rather than lead melody as in the Etcetera String Band.

Being saxophone-oriented, the recordings by The Original Danish Polcalypso Orchestra tend to be in the saxophone friendly keys of Eb or Bb, whereas on Bonne Humeur the Etcetera String Band plays most of their tunes in the mandolin friendly keys of G and D. There actually seems to be one song that was common to both band's repertoire's and that is Sam Polo, a West Indian bamboula, although the arrangements are different.

The Etcetera String Band never did a followup to Bonne Humeur and I've often wondered what pieces they might have included if they had done a sequel? With the recordings of The Original Danish Polcalypso Orchestra, it seems that there may be a possible answer to that question!

Email ThisBlogThis!Share to TwitterShare to FacebookShare to Pinterest
Be a Fan
Posted by Tanner Llewellyn at 10:31 AM