I'm feeling the need to write something about the Goose and Trey Anastasio Band concert that I went to last month in Fairfax, VA. It was one of the best nights of music I have ever witnessed, and I've been going to concerts for 30 years now. This was a pretty historic one.

First off, I liked the venue. Sure, on one hand it's just another college basketball arena. But parking was super easy and no additional cost, bars and restaurants are a short walk away, and the general admission policy for this event meant that if you got in early enough you could grab a good spot, which we did. This all contributed to being a in a very receptive, eager mood for Goose's set.

Goose opened with Arrow and took it big, stretching well over 20 minutes. If there was any question about this band's ability to play arenas that was certainly quelled on this night at least. The song and jam went over well with the eager crowd and this didn't feel like an "opening" band kind of vibe. This was a co-headliner performing and making a bold statement. Arrow was followed by Seeker on the Ridge Parts 1 and 2. I like the slow build of Part 1 and the release when it merges into Part 2. I was focusing on being "in-the-moment" during this part of the set. A new Goose song called Thatch came next, in its 2nd performance ever, having debuted earlier on this TABoose tour.

My ability to stay present fled a bit during Arcadia, as my mind started to dwell on the hunch that Trey would be coming out next to play a couple songs with Goose. Sure enough, that is what happened. Trey sat in for two of Goose's original songs - Hungersite and Tumble.

As I was watching it go down, I wasn't sure if this much hyped sit-in was living up to its potential. Did the twin guitars of Trey and Rick from Goose contribute to a sparkling jam, or did it devolve into just a guitar duel? Hard to say. It sounds good on re-listen, but I would have preferred it if Rick had backed off and given Trey space to let the music breathe and include the rest of the band in more of a collaborative, rather than supportive, role. Before I knew it the set was done. Now it was time for Trey's band.

The original plan was to maybe leave at some point during Trey's set. I'm a big Phish fan, but (before this night) never really considered myself a fan of the Trey Anastasio Band, having seen TAB only a handful of times since its incarnation over 20 years ago. This night would prove to be different. My friend sent me a text tipping me to the rumor that Billy Strings was in the house. The plan now was to stay 'til the end.

The rumor was right - Billy did come out to play - but even before Billy came out Trey's set was incredible. Even though I had been in attendance to TAB shows before, I almost feel like this was my first time actually seeing the Trey Anastasio Band. Seeing everything about it in a new light, getting the sophistication and message of the music for perhaps the first time ever. When Billy finally did come out, what had already been a 10 out of 10 went up to eleven! This is where the night turned the corner from being not just a great night of music, but a peak musical experience. Billy added so much in such a humbling, non-ego way. 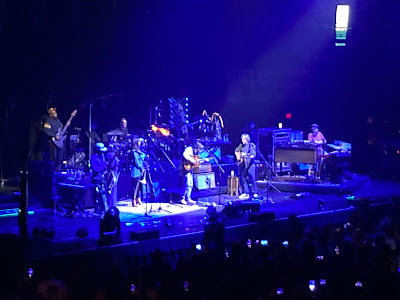 I feel like I learned something over the course of this set and the encore. Or re-learned something I had forgotten. Here on stage with Trey and his band was Billy Strings and members of Goose. There's no reason to judge or be negative or to compare or criticize. This younger generation of bands (and their fans) is doing a great job of cultivating a community of not just positivity, but positivity plus a level of professionalism and inclusion that transcends the previous norm. It's inspiring and makes me want to be the best listener I can be.

Email ThisBlogThis!Share to TwitterShare to FacebookShare to Pinterest
Be a Fan
Posted by Tanner Llewellyn at 9:05 AM