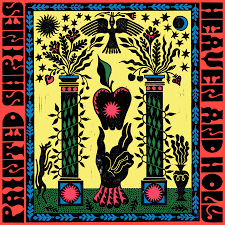 I've been trying to keep up with new releases as they come out in 2021. Here are some favorites at about the half way point of the year.

Giving Tommy Guerrero some company is Panorama by composer and producer Maston. Panorama is designed to sound like the library music of the 1970's. Kind of like an upgraded muzak. Maston also has more on the way this year. Other 2021 albums in a similar "instrumental" vein include Timothy James - Team, Stimulator Jones - La Mano, and Richard Houghten - 3 Seeds.

When it comes to funk/soul jazz, nobody does it better right now than Delvon Lamarr Organ Trio. So a new album by the DLO3 I Told You So is going to make the cut. Following up in that funk style are The City Champs - Luna '68 and and KB's Mixtape No. 3 by Melbourne, Australia's Karate Boogaloo.

Another branch of instrumental is the realm of new acoustic and/or primitive guitar. Breaking through that mélange is Yasmin Williams. With Urban Driftwood, this innovative and unconventional young guitarist from northern Virginia has crafted a work that should hold up over time.

As much as I like instrumental music, what I've really been going after this year is what you might call indie pop. Recent discoveries of bands like The Woolen Men, Dehd, and The Reds Pinks and Purples have put me on a search for bands with a jangle pop, paisley underground, shadow music, post-punk, and/or garage rock influences. There are at least two that I am really excited about so far this year. Firstly there's Painted Shrines, whose album Heaven and Holy has been on repeat for at least the last month and I never get tired of its mix of super catchy songs and sun-dappled instrumentals. It's like the best of both worlds.

Coming even closer to being almost the exact sound I am looking for is Toronto's Kiwi Jr. with their new album Cooler Returns. I guess in the olden days they would have called this college rock. Listening to Kiwi Jr. means constantly being on the edge of being reminded of the band they sound like without ever actually having a specific name come to mind. It's smart, quick and to the point. I don't think there's a bad song on Cooler Returns. Is it too cool for its own good and will it wear out its welcome by the end of the year? That remains to be seen.

Some rock albums that I am still undecided on include The Power of Rocks by Buffet Lunch, Rata Negra's Una Vida Vulgar, Centre by Mt. Mountain, and Uncommon Weather by The Reds Pinks and Purples (after having loved 2019's Anxiety Art). I am eagerly awaiting the chance to hear the debut LP The Ballad of Doug by The Telephone Numbers when it comes out later this month.

It's time to let things slow down a bit for some music with a more languid BPM. I don't always have the attention span for "slow" music but I was all ears when I heard that Phish's Page McConnell was coming out with an atmospheric, synth-based, almost ambient electronic album. The result - Maybe We're the Visitors - is easily the best non-Phish album by a member of that esteemed band. There's an energy burbling just below sea level across these nine tracks. This is one that would really benefit from an audiophile's speaker system.

Once my ears were primed and ready to receive slower music, I found several other new releases that do the trick. These include Promises by Floating Points / Pharoah Sanders / The London Symphony Orchestra, Mar Interior by Mecánica Clásica, and Music for Living Spaces by Green-House. Each of these are four stars out of four.

Those are all the albums I wanted to talk about in this post. What's missing, and who knows why, is music that you might put into jazz or avant-garde brackets. I'm not quite as receptive this year. A quick 3-minute jangly pop song by a band that has studied The Byrds or R.E.M. is going to resonate more right now than someone taking cues from Ornette Coleman or Derek Bailey. At the moment that's the case. Nothing is ever constant though.

Email ThisBlogThis!Share to TwitterShare to FacebookShare to Pinterest
Be a Fan
Posted by Tanner Llewellyn at 8:07 PM