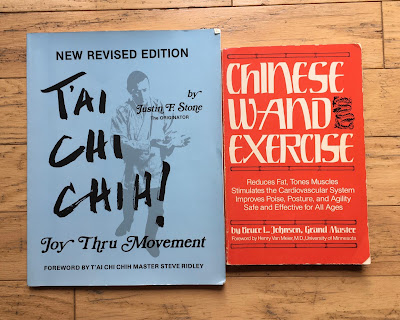 When I was taking an interest in old-time Appalachian music, one thing that became apparent was the attention paid to lineage and pedigree. It wasn't enough to just learn a tune from your fellow jammers, or from a recording by 2nd generation or contemporary musicians like Bruce Molsky or Riley Baugus, no you had to seek out source recordings of who they learned it from. And, if possible, who that person learned it from, unless that was before recordings were made. There also wasn't much emphasis on writing your own tunes in the style.

Now that I'm starting to study traditional exercises like tai chi, I see immediate parallels. In martial arts especially, a form doesn't carry as much weight if it isn't backed by a centuries old, authentic and unbroken heritage. Teachers take pride in being able to trace their style back generation by generation to the earliest known sources.

Which brings me to two interesting takes on this that I've recently become aware of: T'ai Chi Chih (Justin Stone) and Chinese Wand Exercise (Bruce Johnson). Both books debuted in the mid-1970's. Both authors were white (non-Asian) Americans. In the case of Justin Stone, he considered himself the originator of a movement practice called T'ai Chi Chih. He took credit for its creation, although it seems as though Mr. Stone borrowed heavily from pre-established movements, like those associated with qigong the tai chi ruler.

Bruce Johnson, on the other hand, adhered to the lineage tradition, stating that he learned his Chinese Wand Exercises in the 1940's from a 93 year old grand master named Dr. Ch'eng. My guess is that Dr. Ch'eng is mostly fictional, similar to Carlos Castaneda's Don Juan. It is possible that Bruce Johnson saw some or all of these exercises being done by Chinese practitioners but filled in the narrative portion himself. We'll never know for sure, but Dr. Ch'eng may have just been a conglomeration of various personalities that Johnson encountered while stationed in Shanghai. (These wand exercises also bear some resemblance to gymnastics teachings of the late 1800's/early 1900's which could also have been an undocumented influence).

I'm trying to remain ambivalent about how I feel about a venerable background versus an original creation. Both have their pros and cons. No matter how you feel about them, there are great things to be learned from T'ai Chi Chih as well as the Chinese Wand Exercise. I'm glad that I have found vintage copies of each book to study and add to my collection.


Email ThisBlogThis!Share to TwitterShare to FacebookShare to Pinterest
Be a Fan
Posted by Tanner Llewellyn at 8:04 AM