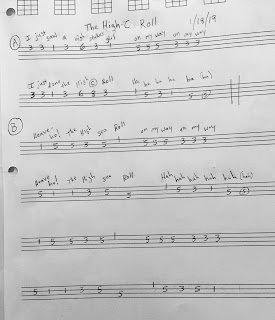 Last week I was listening to the Mongolian band AnDa Union and thought that I would try and write a melody like one of theirs.  Out comes The High Sea Roll or The High-C Roll.  That was my intent when this was written on January 18, 2019 but it came out sounding more like a sea shanty.  So it's a sea shanty.  Here's a phone recording I had made while playing it on banjo.  It's as good as any.

Then this week I was messing around with a minor sounding folk melody that I was calling Don't Forget the Well.  (I often add my  own nonsense words to serve as "lyrics" to the instrumental tunes I write.  The syllables in these words correspond to the notes in the melody and help me remember how it sounds).  Independent from that folk melody I happened upon a little new-classical sounding sequence of notes using just the black keys of a piano.  I didn't give that much thought at first, but when I realized that this little modal sounding folk melody could be shifted over a few semitones so that it lined up with the black key scale of that other little melody, then voila I had something complete enough to be considered a new tune. 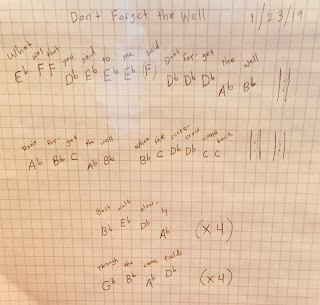 The scale being used here in Don't Forget the Well contains the notes in D-flat major:  Db, Eb, F, Gb, Ab, Bb, C, Db.  Also known as Bb minor.  Note the use of all five "black key" notes on a keyboard.  I wrote it that way on purpose so that it would focus on those notes.  When I got my new Sound Percussion Labs xylophone yesterday, this was the first thing I played on it.  Here's a recording of this tune in Db on my new xylophone, recorded the same day that I got it after taking it out of the box and getting it onto the stand.

I feel like I have more ideas brewing, steeping, simmering inside so hopefully there's more to come soon.

Email ThisBlogThis!Share to TwitterShare to FacebookShare to Pinterest
Be a Fan
Posted by Tanner Llewellyn at 10:17 AM